An NCCOS-supported study detected the algal toxins domoic acid and saxitoxin in three out of four species of ice seals in western and northern Alaska. The finding suggests that ice seals are suitable sentinels for monitoring harmful algal bloom (HAB) prevalence in the Pacific Arctic and subarctic.

From 2005 to 2019, the researchers collected and analyzed domoic acid and saxitoxin from stomach samples of 998 ice seals representing four species: bearded (Erignathus barbatus), ringed (Pusa hispida), spotted (Phoca largha) and ribbon (Histriophoca fasciata) (Figure 1). Bearded seals had the highest prevalence of each toxin, followed by ringed seals, then spotted seals. Native Alaskans harvested these seals from the coasts of the Bering, Chukchi, and Beaufort Seas as a traditional subsistence resource (Figure 2).

The hunters reported no clinical signs of neurotoxicity or paralysis in the seals from domoic acid and saxitoxin exposure, respectively, suggesting that algal toxins may not yet be a significant health threat to ice seals. However, future exposure risks are a concern, given continued ocean warming and the potential for increases in frequency and intensity of algal blooms.

Arctic and subarctic seas are experiencing dramatic changes in sea ice due to changing weather patterns and warming ocean temperatures. These changes have affected the ecology and biogeography of species at multiple trophic levels, with impacts to wildlife and humans. A related review argues that one of the most significant emerging threats in the Arctic is the expansion of HAB species, particularly diatoms of the genus Pseudo-nitzschia and the dinoflagellate Alexandrium catenella that produce the potent neurotoxins domoic acid and saxitoxin, respectively. 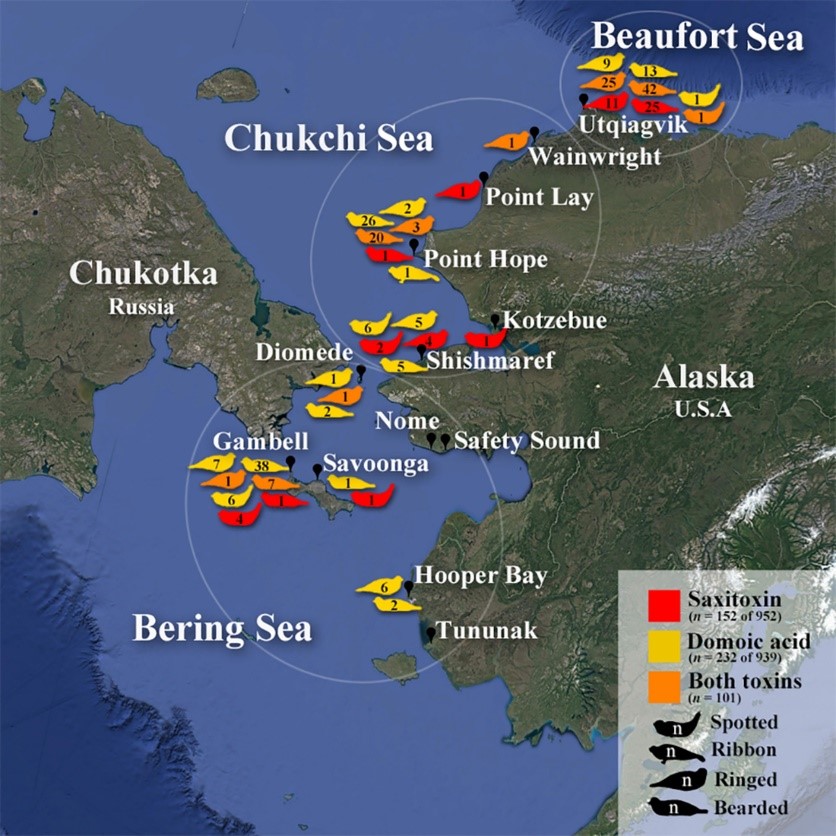 Pseudo-nitzschia and  Alexandrium blooms are common throughout the temperate oceans and cause adverse human and wildlife health impacts and mortality from amnesic shellfish poisoning (domoic acid) and paralytic shellfish poisoning (saxitoxin). Both toxins accumulate in filter-feeding marine prey organisms and are transferred through food webs with significant health consequences to animals at multiple trophic levels. In the last two decades, almost half of the marine mammal unusual mortality events in the contiguous U.S. have been attributable to algal toxin exposure (e.g., see Landsberg et al., 2014), and there is concern that wildlife exposure to HAB toxins may be growing.

This study was supported, in part, by an NCCOS ECOHAB project (Trophic Transfer and Effects of HAB Toxins in Alaskan Marine Food Webs) led by Dr. Kathi A. Lefebvre of the NOAA Northwest Fisheries Science Center.

The project was made possible by the willingness of hunters to contribute samples from their harvest, and by the support of their communities, local governments, Tribal Councils and the Ice Seal Committee.