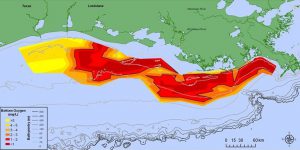 A team of scientists led by Louisiana State University (LSU) developed a model to understand the impacts of hypoxia (low oxygen) on Atlantic croaker in the northern Gulf of Mexico. Results indicate that chronic large hypoxic zones could result in model estimates of a 25 percent reduction in the long-term population abundance of Atlantic croaker over a 140-year period in the Gulf of Mexico. The research represents a major advancement for considering the effect of hypoxia on living resources and demonstrates the first population-level impacts of hypoxia.

Hypoxic zones have low dissolved oxygen concentration that cannot support animal life. The Gulf of Mexico receives large freshwater inputs every spring, especially from the Mississippi River, which contains high concentrations of nutrients from farmlands being prepared for crop season. The fertilizer fuels a massive algal bloom in the Gulf of Mexico, which eventually decomposes in a process that depletes the oxygen and forms the hypoxic “dead zone,” affecting valuable commercial and recreational fisheries and threatens the region’s economy.

Lead scientist Dr. Kenneth Rose, at the LSU Department of Oceanography and Coastal Sciences, sought a unique bottom-up approach to answer—does hypoxia reduce a mobile fish population that could avoid hypoxic water? The model, based on field and laboratory results from the University of Texas Marine Science, simulates realistic conditions of hypoxia effects on Atlantic croaker reproduction, growth, and mortality in the northern Gulf of Mexico.

Scientists have long debated if the massive algal blooms that eventually lead to large hypoxic zones will, increase fish production by fueling food availability, or decrease fish populations due to the eventual depletion of oxygen and reduction of suitable fish habitat. This more realistic model allows the scientists to look at the balance between these complex dynamics by including the positive aspects of algal blooms and negative aspects of hypoxia, while considering fish mobility and hypoxic zone movement—two variables that have hampered scientific breakthroughs in the past. In the case of Atlantic croaker, current levels of hypoxia can be expected to have a negative impact.

The study was funded by NCCOS as part of the Gulf of Mexico Ecosystems and Hypoxia Assessment (NGOMEX) project Modeling Reproductive and Population Impacts of Hypoxia in the Northern Gulf of Mexico.