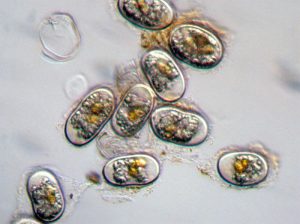 A. fundyensehas both a vegetative stage, where cells grow and float in surface waters(the spring and summer blooms), and seed-like cysts that overwinter in the bottom sediments. Forecasts of the extent and severity of Alexandrium blooms depend on mapping the abundance of the alga's cysts in Gulf of Maine sediments and computer models simulating a range of bloom scenarios based on previous years' ocean conditions.

Embarking November 12 from Quonset Point, RIaboard the NOAA Ship Pisces, scientists collected more than55 sediment core samplesover seven days throughout the Gulf of Maine. From these sediment samples, researchers will determine the presence and abundance of cysts of the harmful alga A. fundyense to incorporate into the forecasting ofHAB events along the New England coast in 2017.

The Gulf of Maine and its adjacent southern New England shelf have extensive shellfish resources, large portions of which are frequently contaminated with A. Fundyense toxins (saxitoxins),known to cause paralytic shellfish poisoning (PSP) in humans when consumed. State managers use the HAB forecasts to monitor the presence of A. fundyense and saxitoxins, ensuring shellfish are safe for human consumption and issuing shellfish bed closures when necessary.

2016 marks the fourth year of this joint NCCOS-WHOI cyst-sampling team effort. The goal is to transition the cyst sampling and cyst laboratory counting to NOAA as a yearly operational forecast, part of the NOAA Ecological Forecasting Roadmap.