An unprecedented bloom of the harmful alga Alexandrium occurred during Fall 2014 in Quilcene Bay, Hood Canal, Puget Sound, WA; the outbreak contaminated shellfish with potent biotoxins that can cause paralytic shellfish poisoning. The area of the bloom was historically biotoxin free, but at the peak of the event, the Washington State Department of Health detected toxin in shellfish over 100 times the regulatory limit for human consumption.

Previous harmful algal cyst mapping efforts found zero or very low concentrations of bloom area cysts. The highest concentration observed was 10 cysts per cubic centimeter (cc) wet sediment in Quilcene Bay in 2013. In 2015, PS-AHAB scientists found a magnitude greater concentration of cysts than in 2013. To disseminate the results outreach strategies included phone calls to area shellfish growers, e-mails to state managers and others, a presentation at the 22nd Washington Shellfish Growers Association Meeting, blogs, and postings to the PS-AHAB website. 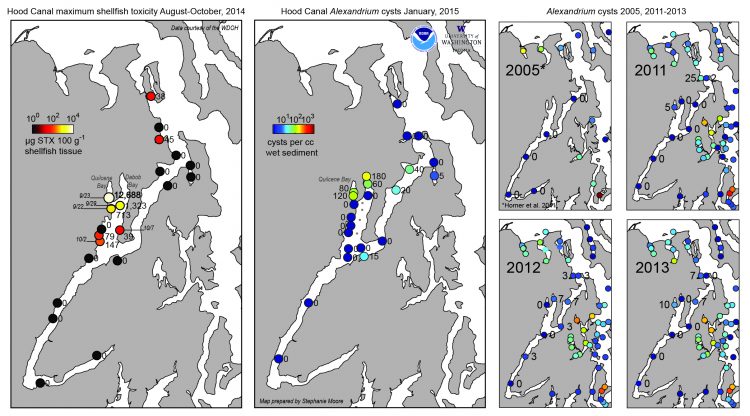 Left Panel: Hood Canal maximum shellfish toxicity values at shellfish monitoring sites with the dates that the maximum values were observed. Right Panels: Hood Canal Winter Alexandrium cyst maps for 2005, 2011, 2012, 2013, and 2015 from surveys conducted as part of NCCOS ECOHAB funding. The series of gray markers along Dabob Bay are sites the project had planned to sample but were unable to access because of Navy equipment that was in the water. Credit: NOAA

So far, no direct relationship exists between locations with high cyst abundances and shellfish toxicity in Puget Sound, and the number of cysts required to initiate a bloom is undetermined. These questions and others form the basis of the PS-AHAB research. Results warrant increased vigilance for monitoring cells and toxins during the 2015 season and beyond in this area. As an example, based on the cyst mapping, Washington State Department of Health closed recreational shellfish harvesting in the Quilcene Bay and Dabob Bay areas of Hood Canal in the Spring of 2015.