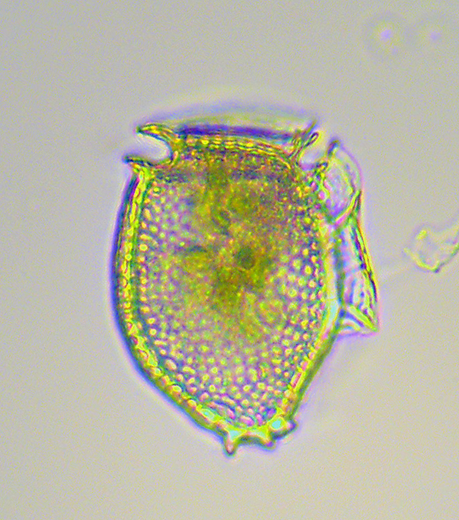 The biological source of Dihydrodinopyhysistoxin-1 (aka dihydro-DTX1), a toxin that causes diarrhetic shellfish poisoning and once described from a marine sponge, is of yet unknown. In a study sponsored by NCCOS, the researchers newly-detected dihydro-DTX1 in multiple species of commercial shellfish collected from the central coast of the Gulf of Maine, USA in 2016 and in 2018 during blooms of the dinoflagellate Dinophysis norvegica.

Diarrhetic Shellfish Poisoning (DSP) is a human intoxication caused by the consumption of shellfish that contain okadaic acid (OA) and the similar dinophysistoxins (DTX1, DTX2) (Reguera et al, 2014). DSP produces gastrointestinal symptoms, usually beginning within 30 minutes to a few hours after consumption of toxic shellfish. Although not fatal, the illness is characterized by incapacitating diarrhea, nausea, vomiting, and abdominal pain. Recovery usually occurs within three days, with or without medical treatment. Of the ~100 Dinophysis species, only 10 are known to produce diarrhetic toxins (okadaic acid and dinophysistoxins) (WHOI 2019).

In the study, enzyme separation followed by analytical chemistry identification (liquid chromatography-high resolution mass spectrometry / LC-HRMS) tentatively identified dihydro-DTX1. More exacting analysis (LC-MS/MS) measurements showed an absence of OA, DTX1, and DTX2, but confirmed the presence of dihydro-DTX1 in shellfish during the blooms of D. norvegica in both 2016 and 2018.

The central coast of the Gulf of Maine is not the only region in the US where D. norvegica occurs, although it appears to be the only region in the US where it is the predominant species of Dinophysis present. D. norvegica has been documented in lower abundance compared to species such as D. acuminata in the mid-Atlantic region, the Pacific Northwest, and along the central coast of California. The researchers state that it remains to be determined if D. norvegica in any of these additional locations also produces the dihydro-DTX1 compound and what potential risk this poses to shellfish consumers.

The researchers report that to date, no illnesses have been associated with the presence of dihydro-DTX1 in shellfish in the Gulf of Maine region. Studies are underway to determine the potency of this new toxin relative to the currently regulated DSP toxins in order to develop appropriate management guidance. 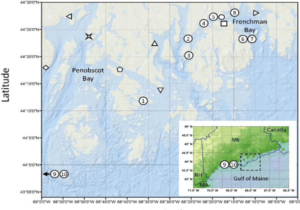 Map of sampling locations during the 2016 Dinophysis norvegica bloom on the central coast of the Gulf of Maine, USA. Symbols indicate sampling locations for both water and shellfish See publication for details. Credit Deeds et al 2020.

This study was supported by NCCOS ECOHAB and PCMHAB projects.