This summer the Gulf of Maine red tide is predicted to be the smallest observed over the last eleven years, as forecast by researchers at Woods Hole Oceanographic Institution (WHOI) and North Carolina State University.

The magnitude and severity of Alexandrium blooms and the subsequent need for shellfish harvesting closures to protect human health vary considerably from year to year and between decades. Shellfish toxicity was severe and widespread from 1978 to 1988 and again between 2003 to 2009, but has been declining since then. We still do not understand what causes the decadal variations in cysts, blooms, and shellfish toxicity.

Seasonal forecasts depend on measurements made the preceding fall of numbers of seed-like cysts in sediments on the bottom of the Gulf of Maine. Cyst abundances measured in fall 2015 by NCCOS and partners aboard the NOAA Ship Henry B. Bigelow are the lowest recorded since the surveys began in 2004, leading to the 2016 forecast for a small bloom. However, oceanographic conditions can also affect Alexandrium blooms and shellfish toxicity, making continued monitoring necessary. 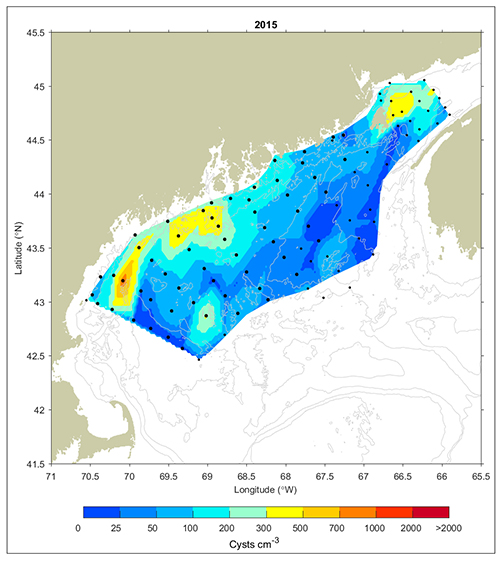 Concentrations of Alexandrium cysts in the Gulf of Maine, 2015. Credit: WHOI.

Throughout the spring and summer, robotic HAB sensors (environmental sample processors or ESPs) will measure the abundance of Alexandrium cells in the water at three locations along the Maine coast. One ESP will include a toxin sensor. In addition, the Northeastern Regional Association of Coastal Ocean Observing Systems (NERACOOS) will be deploying nutrient sensors ; data from those sensors can be used to refine forecasts and interpret other sensor data. States also monitor Alexandrium cells and shellfish toxicity along the shore.

The 2016 forecast is the ninth seasonal Gulf of Maine red tide forecast. It is part of a NOAA ecological forecasting initiative that aims to deliver accurate, relevant, timely, and reliable ecological forecasts directly to coastal resource managers and the public as part of its stewardship and scientific mandates for coastal, marine, and Great Lakes resources.