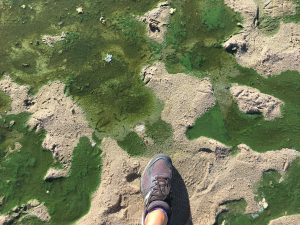 An NCCOS-sponsored study found that freshwater cyanobacteria, and their toxins, produced in a compartmentalized California estuary can accumulate and enter marine waters episodically, particularly during storms and significant tidal exchange. The potential human and environmental health consequences of these mixtures are poorly understood.

The existence of marine algal–based toxins in coastal ecosystems is common and well documented. However, the occurrence of freshwater cyanobacteria and their toxins along marine coastlines is much less studied, and little information exists on whether toxins from marine and freshwater sources co-occur regularly. The current study focused on the discharge of cyanotoxins from the Santa Clara River estuary in California as a consequence of an exceptionally high tide ("King Tide") that breached the berm separating the coastal lagoon from the Pacific Ocean. 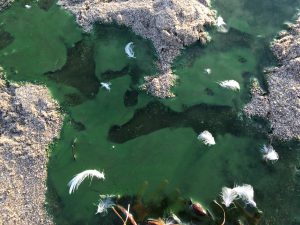 Project monthly monitoring in the Santa Clara River estuary lagoon throughout 2017 documented more than a dozen co-occurring cyanobacterial genera, as well as multiple algal and cyanobacterial toxins. Biotoxin monitoring before and following the King Tide event using Solid Phase Adsorption Toxin Tracking (SPATT) in the lagoon and along the coast revealed the co-occurrence of microcystins, anatoxin, domoic acid, and other toxins on multiple dates and locations. The marine toxin domoic acid was ubiquitously present in SPATT deployed in the lagoon and along the coast. Microcystins (cyanotoxins) were also commonly detected in both locations, although the beach berm retained the lagoonal water for much of the year.

Mussels collected along the coast contained microcystins in approximately half the samples, particularly following the King Tide event. Anatoxin (a cyanotoxin) was observed in SPATT only in late December, following the breach of the berm. 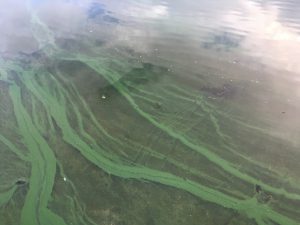 Accumulations of cyanobacterial at the surface of the water and sandy beach within the lagoon of the Santa Clara River estuary. Credit: Avery Tatters, UCLA, now USEPA.

The findings indicate both episodic and persistent occurrence of both cyanotoxins and marine toxins may commonly contaminate coastlines in proximity to cyanobacteria-laden creeks and lagoons. To thoroughly characterize toxin presence in a dynamic system such as the land-sea interface, multiple samples and sampling approaches are required to provide a holistic and comprehensive determination of toxin presence and prevalence in these systems. The combination of monitoring tools using both whole water samples and time-integrative SPATT samples and mussel samples provided robust insight into toxin dynamics.

The results reinforce the importance of routine monitoring for both cyanotoxins and marine toxins at the land-sea interface, especially in estuarine and marine waters in the Southern California Bight region.

The study was supported in part by the NCCOS project Improving Tools for Monitoring Multiple HAB Toxins at the Land-Sea Interface in Coastal California. 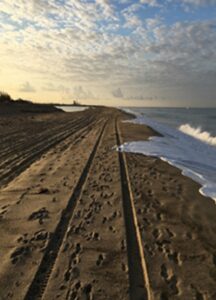 Evidence of recent breaches of the Santa Clara River estuary beach berm were apparent at the time of the King Tides. Credit: Tatters et al., 2021. 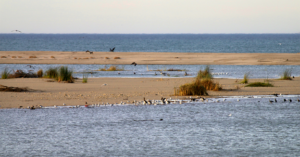