Scientists have identified four kinds of algal toxins in mussels collected from San Francisco Bay. The study, published in Harmful Algae, is the first to report the co-occurrence of both freshwater and marine toxins in mussels consumed by humans and animals.

The researchers, led by Dr. Misty Peacock while at the University of California Santa Cruz (currently at Northwest Indian College), found nearly all mussels collected from the bay were contaminated with at least one of the detected algal toxins, and 37 percent contained all four—one of which originates in freshwater.

Mussels in the bay were contaminated with the following toxins:

Contaminated mussels pose a serious health threat to people and animals who eat them. Even though San Francisco Bay lacks commercial shellfish operations, people still harvest and eat mussels from the bay. While commercially harvested shellfish are generally safe because they undergo regular testing, neither microcystins nor Dinophysis shellfish toxins are routinely monitored in California shellfish. 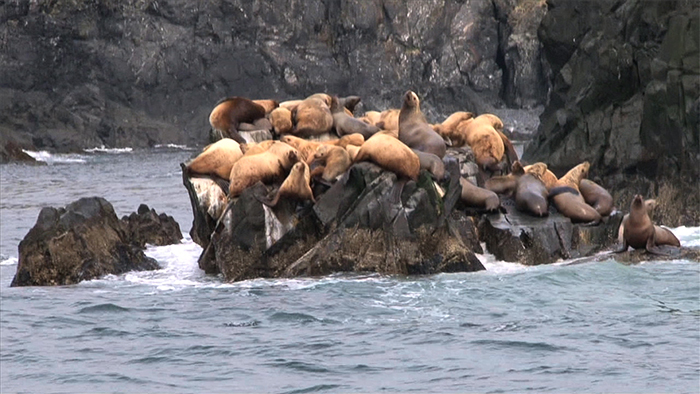 California sea lions are becoming sick, and dying in some cases, from ingesting domoic acid—a neurotoxin that accumulates in fish and shellfish they consume. Credit: NOAA.

Harmful algal bloom monitoring has generally been water body–dependent, focusing either on marine or freshwater toxins, but not both. For example, cyanobacterial toxins were previously considered a public health issue only for freshwater, with concerns about adverse effects to drinking and recreational waters.

The publication stems in part from a NOAA-funded Monitoring and Event Response for Harmful Algal Bloom (MERHAB) research project that aims to address this emerging harmful algal bloom concern. Senior study author Raphael Kudela, the Lynn Professor of Ocean Health at the University of California Santa Cruz, is working closely with state and federal agencies to assess health risks and develop better monitoring tools. According to Dr. Kudela, these findings and other recent studies are prompting several California agencies to consider changes to their monitoring programs.