Anew study describes optimal growth conditions for several species and strains of the benthic marine dinoflagellate Gambierdiscus and highlights how these species and strains respond differently to varying levels of salinity, light, and temperature. These environmental factors, along with suitable seafloorhabitat, predict the geographic distribution of Gambierdiscus. Gambierdiscus is a genus of tropical and subtropical benthic-dwelling, single-celled marine dinoflagellates which produce toxins that can accumulate in fish. When humans consume contaminated fish, ciguatera fish poisoning (CFP) can occur. 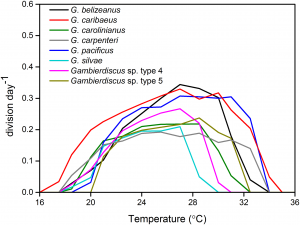 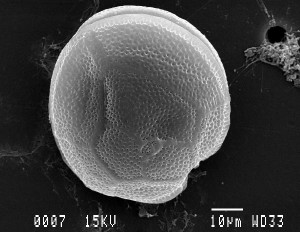 The results showed that Gambierdiscus growth rates display a normal bell-shaped statistical curve for salinity and temperature with optimal growth at salinities between 25 and 45 parts per thousand, and at temperatures between 21 to 32.5 degrees Celsius. Assessment of growth responses to irradiance showed higher light intensities favoring increased growth rates. Growth rates at the extremes of the three environmental factors were highly variable. Gambierdiscus growth patterns varied between species and within individual species, even for strains that were isolated from the same location in the same survey. Gambierdiscus growth patterns could explain their geographic ranges; notably, the four species exhibiting the widest range of environmental tolerance are geographically the most broadly distributed.

This research aids efforts to model and predict how ranges of Gambierdiscus shift under a changing climate and help predict the potential spread of CFP illnesses. This study is part of the NCCOS-funded ECOHAB CIGUAHAB project.