In Puget Sound, the toxic algaAlexandrium catenellathreatens the health of people who eat shellfish contaminated with toxins it produces. An NCCOS Ecology and Oceanography of Harmful Algal Blooms (ECOHAB ) project, Puget Sound Alexandrium Harmful Algal Blooms, annuallymapped 'seedbeds' of Alexandrium resting stages (cysts) at about 100 locations on the bottom throughout Puget Sound. The project recently assisted the Washington State Department of Health (WSDOH) by identifying potential new cyst beds that could increase the risk of future blooms. 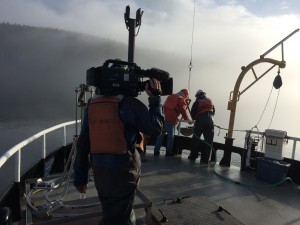 WSDOH and the local shellfish growers' share concern that the large blooms caused a new "seed bed" to form (i.e., a concentrated area of cysts deposited to bottom sediments that provide the inoculum for blooms the following season) that could increase bloom risk in this area next year. Ship time funds from thePuget Sound HAB project detailed some cyst mapping in the area. Led by NOAA's Stephanie Moore, scientists from the University of Washington Tacoma conducted cyst mapping on the university'sR/V Clifford A. Barnes January 17-20, 2015. Local shellfish grower, Penn Cove Shellfish, contributed funds to purchase lab consumables needed for cyst mapping. A videographer from the NOAA Fisheries Ocean Media Center joined the cruise to document the effort (download 9 min 30 sec video of underwater coring courtesy of Paul Hillman, NOAA). 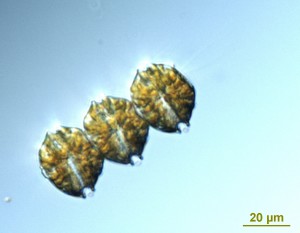 Previous Hood Canal cyst mapping efforts found zero or very low concentrations of cysts in the area; the highest concentration observed was 10 cysts per cubic centimeter (cc) of wet sediment in 2013. The 2014 cyst mapping found an order of magnitude greater concentration of cysts; up to 120 and 180 cysts per cc wet sediment in Hood Canal's Quilcene Bay and Dabob Bay, respectively. The results were sent to state and tribal resource and public health managers and representatives of the shellfish industry warning them extra monitoring will be necessary this year. Also, any future dredging activity that could disturb the cysts and suspend them up into the water column where they could germinate should be planned outside the bloom season.

No relationship has been identified yet between locations with high cyst abundances and shellfish toxicity in Puget Sound. Also, the number of cysts required to initiate a bloom has not yet been determined. These questions and others will form the basis of future research. Nevertheless, the results warrant increased vigilance for monitoring cells and toxins during the 2015 season and beyond in this area.