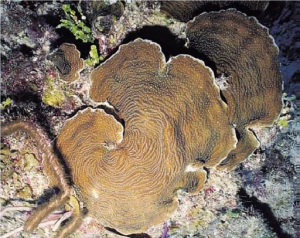 Agaricia lamarcki inhabits hidden areas on shallow reefs (10 -40 m) and is one of the most abundant species inhabiting mesophotic coral ecosystems from 40 to 100 m. A. lamarcki hosts the thermal-tolerant alga, Symbiodinium trenchii. Credit: NOAA

Light-dependent corals form a mutually beneficial relationship (symbiosis) with the single-celled algae Symbiodinium, commonly known as zooxanthellae, which provide energy for the coral through photosynthesis. There are a variety of species of Symbiodinium which have different tolerances for light and temperature, and these traits determine the ability of coral to thrive under warmer conditions. Corals in shallower depths are at a greater risk. For the very abundant coral A. lamarcki, although found in both shallow and mesophotic depths (10-100 m) throughout the Caribbean, its ability to replenish depleted shallower reefs (10-40 m) may depend on the algae type it houses.

This is the first reporting of the presence of the thermal-tolerant species,Symbiodinium trenchii, in the upper layers of the coral's depth range (20-25 m). This finding raises hope that A. lamarcki corals associated with S. trenchii living in the depleted shallower reefs (10-40 m) may be adapting to changing environmental conditions.

This study was part of the Deep Coral Reef Ecosystem Studies Program in the Caribbean, conducted by the Caribbean Coral Reef Institute at the University of Puerto Rico. Learn more about the study in the journal Marine Ecology.

Past, Present, and Future High Tide Flooding in Charleston, SC