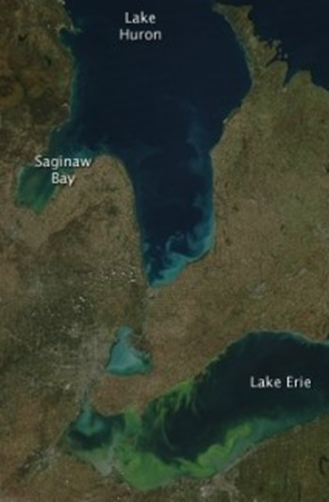 Scientists from NCCOS and the University of Maryland collaborated on a research study detailing the seasonal timing (phenology) of Saginaw Bay’s harmful cyanobacterial (blue-green algae) blooms and comparing them to those plaguing Western Lake Erie. The study gives recommendations on managing cyanobacteria blooms concerning agricultural practices and wetland mitigation for Saginaw Bay to avoid the blooms that plague similar waters of Western Lake Erie.

Saginaw Bay and the Western Lake Erie basin (WLEB) are eutrophic watershed catchments in the Laurentian Great Lakes that experience annual, summer-time cyanobacterial blooms. Both basins share many features including similar size, shallow depths, and equivalent-sized watersheds. They are geographically close and both basins derive a preponderance of their nutrient supply from a single river (Saginaw River and Maumee River, respectively). Despite these similarities, the bloom phenology in each basin is quite different.

The Saginaw Bay watershed is the largest in the State of Michigan and includes one of America's most extensive contiguous freshwater wetland systems. The land use within the watershed consists of 45% agriculture, 22% forest, 16% open water/wetland, 10% residential, 6% grassland, and 1% high density residential. For the WLEB, predominant land use in the watershed (78%) is agricultural. Nearly the entirety of the WLEB watershed was once home to the approximately 4,000 square kilometer “Great Black Swamp,” which was drained for agriculture in the mid-19th century leaving the WLEB nearly devoid of wetlands.

For the study, a twenty-year time series of imagery from the Moderate-resolution imaging spectroradiometer (MODIS) satellite was used to derive cyanobacterial bloom estimates from the WLEB and Saginaw Bay and characterize bloom phenology in each system. The role of nutrient inputs, land use practices, water residence times, as well as other environmental factors in governing the observed variability, timing and intensity of the cyanobacterial blooms were examined based on data from various long-term datasets. This comparison allowed assessment of whether the factors controlling bloom dynamics appeared similar or different between the two systems.

The comparison showed blooms in Saginaw Bay occur at the same time and place and at the same moderate severity level each year. The WLEB, in contrast, exhibits far greater interannual variability in the timing, location, and severity of the bloom than Saginaw Bay, consistent with greater and more variable phosphorus inputs. 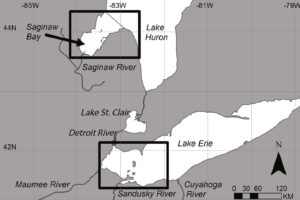 Map of the study area showing Saginaw Bay and the Western Basin of Lake Erie. Modified from Wynne et al., 2021.

Overall study conclusions are that Saginaw Bay has less variable, lower biomass cyanobacterial blooms than the WLEB. This difference is driven by lower and less variable P-inputs from the Saginaw River compared to the Maumee River.

From a management perspective, the study shows the Saginaw Bay watershed provides a realistic model for further cyanobacterial abatement efforts in the WLEB. If loading into the WLEB were reduced to approximately 500 metric tons/year, blooms would be expected to be equivalent to those observed in Saginaw Bay. Conversely, if P-inputs in Saginaw Bay are increased because of some factor, such as a shift toward more intense agricultural land use, or additional destruction of wetlands, the blooms are likely to intensify significantly.