A new study has found that compounds excreted by common coastal green seaweeds, or sea lettuce, detrimentally affect other organisms.

The green seaweed Ulvaria obscura forms blooms in the intertidal and subtidal zones. During high spring tides, this seaweed strands on the shore and succumbs to drying, high levels of sunlight, and high temperatures. These stresses trigger the release of a variety of harmful chemical compounds, including the nerve transmitter dopamine. 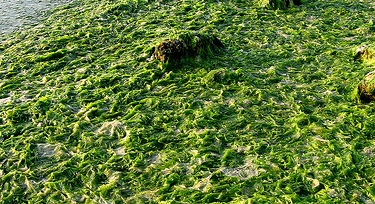 The research study—led by Western Washington University, with funding from the NCCOS Ecology and Oceanography of Harmful Algal Blooms (ECOHAB) program—tested the hypothesis that dopamine causes cellular damage or death in co-occurring seaweeds and young crabs in sea water.

Using a series of experiments simulating conditions encountered by low intertidal algae, the research team quantified the release of dopamine. The authors ran tests that examined the effects of different dopamine concentrations on the growth of the green alga Ulva lactuca, on the germination of the brown alga Fucus distichus, and on the survival and time to first molt of larval and juvenile crabs (Metacarcinus magister and Cancer oregonensis).

The authors concluded that the large release of dopamine by U. obscura following stressful environmental conditions significantly affects co-occurring species in intertidal pools as well as intertidal and shallow subtidal marine communities where the alga can form large blooms.

Algae blooms are prolific this time of year | SeacoastOnline.com