NCCOS-sponsored scientists combined two traditional, but often separate, modeling approaches to better characterize, track, and predict coastal hypoxia in the northern Gulf of Mexico. Their study found that “fused” geostatistical and mechanistic models substantially improve predictions about where coastal hypoxia (low dissolved oxygen) will occur. The study describes the pros and cons of each modeling approach and shows how combining the two approaches is beneficial to understanding and managing hypoxia.

In 2008, roughly 95,000 square miles of the world’s coastal waters were reported to experience hypoxia ("dead zones") at varying levels of severity. This area has increased over the past decade, as eutrophication and algal blooms have increased. The hypoxic zone in the northern Gulf of Mexico is of special interest because it is the second largest man-made dead zone in the world, with potential negative consequences for the region’s economically important fisheries. 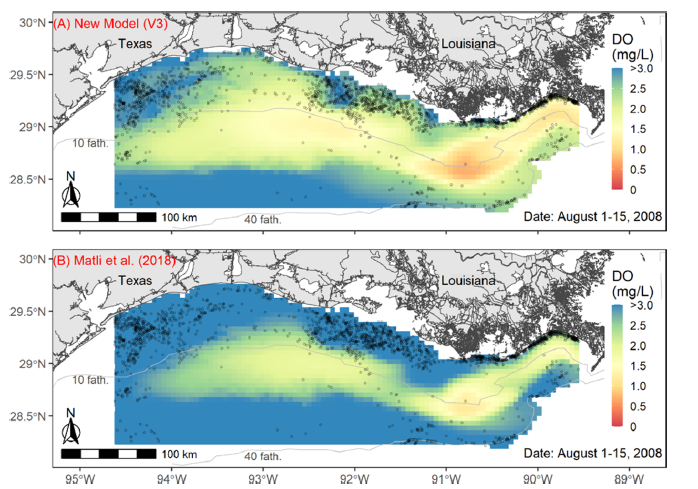 Study results have implications for understanding the effects of hypoxia on economically important fisheries in the region, for example, the shrimp fishery. Initial comparisons suggest that the fusion model is generally consistent with shifts in shrimp boat distribution, with shrimping activity concentrated largely in moderately low oxygen bottom waters near the edges of the hypoxic zone (Figure 1A). In contrast, the stand-alone geostatistical model does not always align as well with the spatial structure evident in the fishery (Figure 1B).

Because many harvested species are highly mobile and can move vertically in the water column, future model developments that estimate the thickness and volume of hypoxia may also be beneficial. Overall, fusion-based hypoxia estimates have the potential to improve the assessment and management of impacted fisheries.

The fused modeling approach could be extended to other hypoxic systems where there are sufficient bottom water dissolved oxygen observations and meteorological data. Model results could also help inform Mississippi River/Gulf of Mexico Hypoxia Task Force efforts to track progress toward reducing hypoxia in the Gulf.

The study was conducted as part of a larger NCCOS project on fisheries and hypoxia in the Gulf of Mexico.