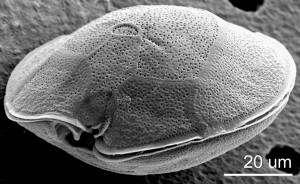 A recently published finding may contribute to the development of a long-elusive affordable ciguatoxin detector, crucial for equatorial peoples worldwide at risk of contracting a severe type of seafood poisoning.

While researching toxicity differences in the several species of tropical algae that cause ciguatera, researchers from the National Centers for Coastal Ocean Science and partners found that another substance in the algae exists in more easily detectable amounts and directly correlates to the amount of ciguatera toxin the tiny plants have. This alternative means may be the key to inexpensive detectors.

Scientists have been on the hunt for a less costly means to detect ciguatera, which is made by a microscopic alga called Gambierdiscus. The toxin is responsible for more human illness than all other harmful algal bloom species combined. It's toxic in extremely minute amounts, so any detection method must be very sensitive. 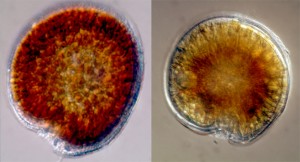 Images of G. carolinianus (left) and G. carpenteri (right). The color images are of live cells and show typical cell morphology (form & structure) and pigmentation for each species.

The algae sicken people who eat top predators (usually sportfish popular with tourists) which concentrate the toxin by preying on small algae-grazing reef fish. The illness is difficult to diagnose and no tests are commercially available. There is no monitoring program on coral reefs to help detect it, and there is no effective treatment or antidote for it.

The scientists' preliminary results indicate that the relative production of the easy-to-measure maitotoxins by various Gambierdiscus species is correlated to the amount of ciguatera toxins produced by the same species. If this correlation holds up during the next phase of the project, it will possible to adapt a maitotoxin assay as an effective method for assessing the risk of ciguatera in outbreak-prone regions.