An NCCOS-sponsored study provides the most comprehensive and quantitative assessment to date of the in situ toxicity of Gambierdiscus marine dinoflagellates in the Caribbean. Study findings have implications for the monitoring and management of ciguatoxin-related health risks in the Greater Caribbean region. 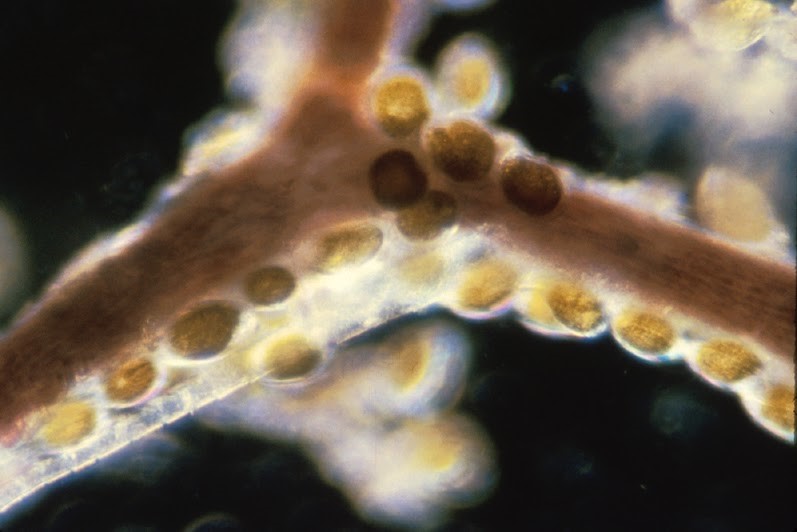 Gambierdiscus is a genus of tropical and subtropical benthic-dwelling, single-celled marine dinoflagellates with species capable of producing ciguatoxins. Gambierdiscus cells grow on the surface of macroalgae which are grazed by herbivorous reef fish and invertebrates. Although there is limited evidence that ciguatoxins can bioaccumulate in these marine organisms, the potency of the toxins present in the organisms create a risk for consumption. When humans eat contaminated fish or invertebrates, a debilitating illness, ciguatera poisoning (CP) can occur. CP is the most prevalent form of algal toxin–related seafood poisoning in the world.

The study documents findings from a three-year monthly time series of Gambierdiscus spp. abundance and ciguatoxin toxicity in benthic samples collected around St. Thomas, U.S. Virgin Islands. Algal bloom measurements were compared to key environmental factors, including temperature, salinity, nutrients, benthic cover, and physical data. The results showed that peak Gambierdiscus abundance occurred in summer while toxicity peaked in cooler months. Asynchronous trends between cell abundance and toxicity was most evident at deeper, offshore sites where macroalgal cover was highest year-round. Other environmental parameters did not correlate with the ciguatoxin variability observed over time. Researchers standardized the cell toxicity of the mass of the most abundant benthic macroalgal host (Dictyota spp.) across the collection sites to provide an estimate of toxin load, as an estimate of the toxin that might be moved into the food web.

The findings indicate monitoring Gambierdiscus abundance alone likely would not help determine when and where trophic systems are likely to encounter and biomagnify ciguatoxins and also provide valuable constraints for efforts to model in situ ciguatoxin levels and trophic transfer of ciguatoxin in the Greater Caribbean region.