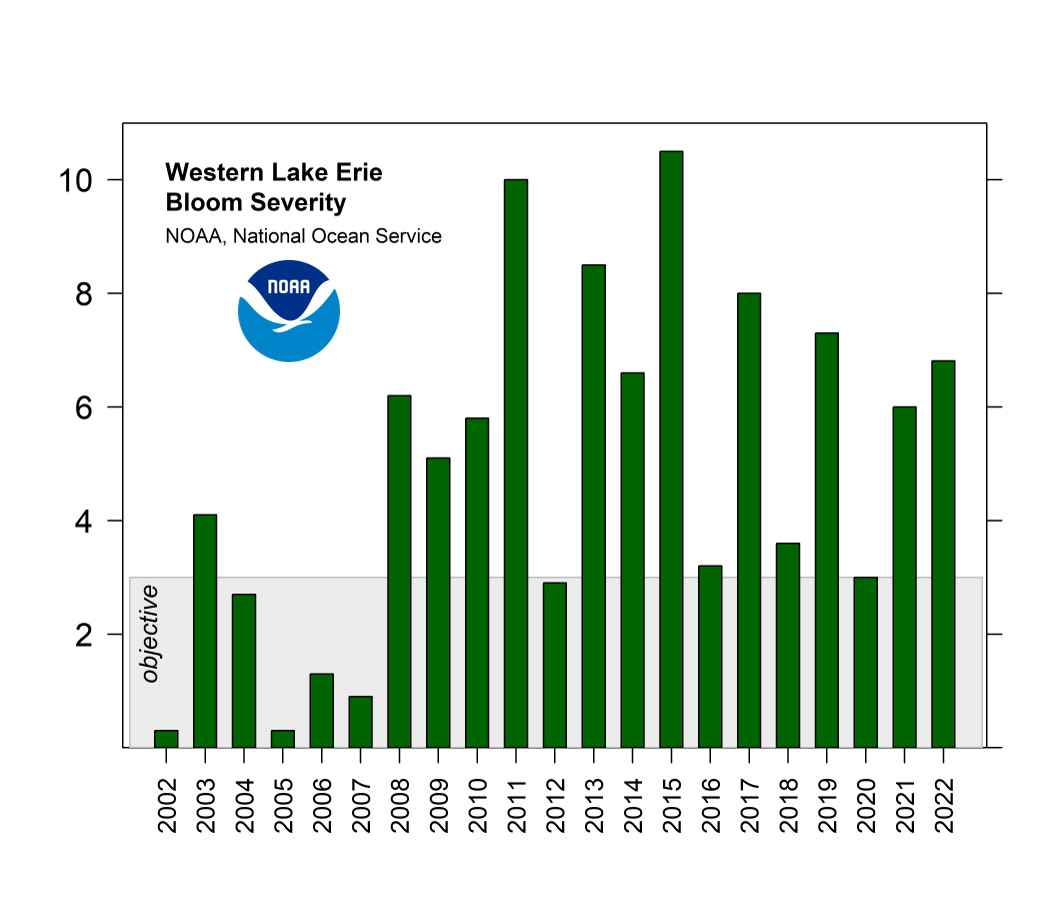 October marked the end of the summer Microcystis harmful algal bloom (HAB) on Lake Erie, though a bloom of another HAB species, Dolichospermum, continues to persist. The 2022 Microcystis bloom had a final severity index (SI) of 6.8, similar to the 2021 bloom where the severity was 6.0.

The Microcystis bloom developed in mid-July and reached a peak in late August, with the bloom peak lasting for several weeks through mid-September. The bloom peak persisted for multiple weeks during the 30-day period, contributing to a higher severity index, as compared to past years when the bloom peak lasted only a week or two. Additional information is needed to determine the cause of the longer bloom peak. Elevated winds in September reduced the surface bloom concentrations, but did not terminate the bloom. The bloom was less extensive (covered a smaller area) than in 2021, but was more concentrated (more severe). At its peak, the Microcystis bloom covered 416 square miles.

The bloom switched from Microcystis dominated to a (lower toxicity) Dolichospermum species in early-October, which continues to persist, lasting longer than previous years despite increased winds and cooler temperatures during the late fall.  Historically, this species has been present later in the Lake Erie bloom season, but a bloom of this size this late in the year is unprecedented. More research is needed to determine the cause of this shift and bloom persistence.

The forecasted bloom severity was originally between 2 and 4. The forecast was amended in early August to include measured July total bioavailable phosphorus (TBP) loads, which were greater than the TBP loads used for the seasonal forecast, and predicted a severity of 4.5 with a range up to 5.5. The index is based on the amount of bloom biomass over the peak 30 days of the bloom. An SI above 5.0 indicates a potentially harmful bloom. The largest blooms, 2011 and 2015, were 10.0 and 10.5, respectively.

This seasonal forecast uses an ensemble of different models, which consider phosphorus loading into the lake during the spring and early summer. Discrepancies between the forecast and the final bloom severity suggest the current models are missing a component of bloom dynamics. NOAA scientists will examine the differences between observed and predicted bloom severity in comparison with forecasts for previous years to evaluate the models.

The Microcystis bloom in western Lake Erie at the bloom peak in Aug 30-Sep 8, 2021 (left) and Aug 20-29, 2022 (right). The images are derived from the Copernicus Sentinel-3 mission provided by EUMETSAT. Blue indicates low concentrations that would not be obvious to the eye. Areas that are red had greater likelihood of scum formation. While 2021 had a larger bloom area, most of this was at low concentrations. In contrast, the 2022 bloom had a larger area of high concentrations at the bloom peak.