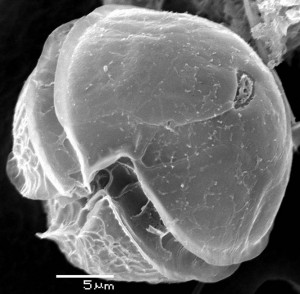 This small plant could ruin your dinner plans. It's called Alexandrium, and it's responsible for paralytic shellfish poisoning, which you can get by eating contaminated shellfish. Credit: Steve Morton.

Coastal areas around New England should prepare for a "moderate" red tide this spring and summer, according to scientists from the Woods Hole Oceanographic Institution. This seasonal forecast is based on samples of algal cysts taken from the ocean floor last year as indicators of this year's bloom severity. For the first time, the team also used 34 years of historical data to further refine their model.

The Gulf of Maine red tide is caused by an alga called Alexandrium fundyense that produces a highly potent toxin responsible for paralytic shellfish poisoning in people and wildlife eating contaminated shellfish. Red tide typically occurs every year along some portions of the Gulf of Maine coast. This year's outlook is similar to the 2012 red tide, also classified as "moderate."

When the algae drift into commercial beds, state agencies shutter them for consumer safety, a financial hardship for communities whose livelihoods depend on the industry. For example, a 2005 Alexandrium bloom cost Massachusetts nearly $50 million and Maine about $23 million.

Filter-feeding shellfish concentrate the algae as they strain the water for food. Shellfish beds in affected states undergo extensive testing and are closed to harvesting if toxin levels exceed the regulatory threshold, ensuring that commercially available shellfish are safe to eat. All human cases of illness stem from people who gathered shellfish for food from closed areas without first checking or ignoring closure notices.

This seasonal forecast is a general warning of whether the Alexandrium bloom will be limited, moderate or extensive in the upcoming spring and summer. A more precise, real-time forecast for where and when the bloom will end up depends on weather events that cannot be predicted months in advance. Customized weekly forecasts, which employ wind and ocean current data are provided to managers like weather forecasts while the event is underway. NOAA plans to transition both the seasonal and weekly forecasts from research to the NOAA HAB Operational Forecasting System run by the Center for Operational Oceanographic Products and Services.

This marks the sixth annual forecast season funded by the National Centers for Coastal Ocean Science and operated by Woods Hole.

With Second Workshop, NCCOS Continues Focus on Hypoxia’s Effects on Fish and Fisheries