We will develop predictive spatial models for deep-sea coral habitat within the Papahānaumokuākea Marine National Monument (PMNM). PMNM’s boundaries were expanded in 2016, and this expansion is being reviewed under Executive Order 13792. PMNM has identified a critical need for additional information characterizing the extent of vulnerable and ecologically significant deep-sea communities in the expanded boundaries to support management planning and permitting efforts. 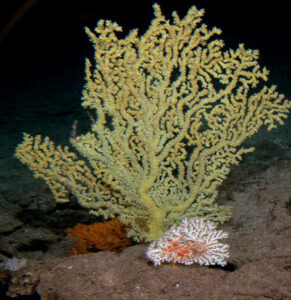 Why We Care
Deep-sea coral (DSC) communities are vulnerable to anthropogenic impacts such as fishing and ocean acidification, and have recently been the focus of conservation and management efforts across the U.S. However, data describing their locations are often limited by the considerable costs and difficulties of surveying the deep ocean. Prior to 2015, few surveys had documented DSCs in the deeper waters below 1,000 m within PMNM. In 2015 and 2016 expeditions by NOAA Ship Okeanos Explorer (operated by NOAA Office of Exploration and Research, OER) surveyed previously unexplored seafloor features within PMNM to document DSC, sponge, and fish communities as part of a broader campaign focused on the deep-sea areas within Pacific monuments and sanctuaries. In 2018 the E/V Nautilus (operated by the Ocean Exploration Trust, OET) surveyed several seamounts in a poorly known area of PMNM. The NOAA Deep Sea Coral Research and Technology Program (DSCRTP) is currently funding the Hawaii Undersea Research Laboratory (HURL) to annotate DSC observations from surveys conducted on these expeditions.

While these recent data collections provide extremely valuable information about the deep-sea benthic communities within PMNM, much of the deep-sea area of PMNM is still unexplored. Predictive spatial modeling has become a cost-effective tool for identifying potential distributions of DSCs and other deep sea organisms in areas where data are sparse yet information is needed to support conservation and management decisions. Through partnerships with NOAA National Marine Fisheries Service (NMFS), particularly the DSCRTP, and the Bureau of Ocean Energy Management (BOEM), NCCOS has developed models predicting distributions of DSCs and other benthic communities for nearly all deep sea areas of the U.S., including the Main Hawaiian Islands.

NOAA Office of National Marine Sanctuaries (ONMS) has identified a critical need for additional information characterizing the extent of vulnerable and ecologically significant DSC communities to implement management in the expanded Monument boundaries. This project will leverage the considerable new DSC observations available from recent deep-sea expeditions and NCCOS’s extensive experience and recent advances in predictive spatial modeling to address PMNM’s urgent need for information describing the extent of vulnerable marine habitats within its boundaries.

What We Are Doing
This project will use predictive modeling to characterize the spatial extent of deep-sea coral habitat within the Papahānaumokuākea Marine National Monument. This work will be conducted in close partnership with PMNM and the University of Hawaii’s HURL. It was funded by NOAA NCCOS and leverages investments made by several organizations, including NOAA DSCRTP, NOAA OER and Ocean Exploration Trust. To develop these models, NOAA NCCOS will:

NCCOS will also prepare a technical report summarizing the findings of the work, including descriptions of the deep sea coral observation data and environmental covariates used in the models, the modeling methods, and maps and measures of the extent and distribution of known and predicted deep-sea coral habitat within PMNM. FGDC compliant metadata will be developed for the GIS data layers developed during this modeling effort. These data sets will be delivered to PMNM, and also made publicly available via NOAA’s National Centers for Environmental Information (NCEI).

Benefits of Our Work
The Presidential Proclamation that expanded PMNM in 2016 also mandated the creation of a management plan for the expansion area, including a framework for permitting access. A key challenge for NOAA ONMS in developing this management plan has been a lack of information on the types and extent of deep-sea resources in the Monument. By characterizing the extent of DSC habitat within PMNM, this project will fill this data gap, and help PMNM and its co-managers (State of Hawaii, U.S. Fish and Wildlife Service, Office of Hawaiian Affairs) identify specific locations for future research and management activities. This Presidential Proclamation also directs the Secretary of Commerce to consider initiating the process of national marine sanctuary designation for the Monument. This project will also help with this process by describing DSC resources that would be protected by sanctuary designation.

This project will provide critical information on the extent of vulnerable DSC habitat within PMNM in the form of easily digestible map products for this and future reviews of the PMNM expansion and protections. In legislative and agency briefings, these map products will be a powerful communication tool for demonstrating the spatial extent and distribution of DSC habitat within PMNM. Audiences for these map products include NOAA ONMS and Monument Management Board resource managers, legislative and agency leadership, as well as partners and the public.