In 2004, the Taylor Energy Mississippi Canyon 20 (MC20) oil and gas drilling platform was toppled during Hurricane Ivan. Since the collapse of the drilling platform, the MC20 site has been associated with persistent plumes of oil and gas and surface oil slicks. At the request of the Department of the Interior’s Bureau of Safety and Environmental Enforcement (BSEE), NOAA's National Centers for Coastal Ocean Science (NCCOS), in cooperation with NOAA’s Office of Response and Restoration, surveyed the MC20 site in September 2018 to determine the source, composition, and extent of the oil and gas discharge.

Why We Care
The Gulf of Mexico supports a highly diverse ecosystem and represents an important resource for commercial and recreational fishermen, tourism, and the oil and gas industry. When oil-related chemicals are released into the marine environment they can bioaccumulate in aquatic organisms. Many individual oil-related chemical compounds are toxic, with some being likely carcinogens.

In September 2004, Hurricane Ivan, a Category 3 storm at the time, passed through the northern Gulf of Mexico. Severe wave action attributed to the storm triggered a subsea mudslide that toppled Taylor Energy Company’s Saratoga oil production platform A at Mississippi Canyon Block 20. The superstructure, also known as the jacket, came to rest on the ocean floor approximately 210 meters southeast of the original location. The collector bundle containing the original 28 well pipes was also dragged in the direction of the collapsed jacket, breaking and becoming buried by deposited sediment at the northwest corner of the final resting place of the structure (Figure 1). 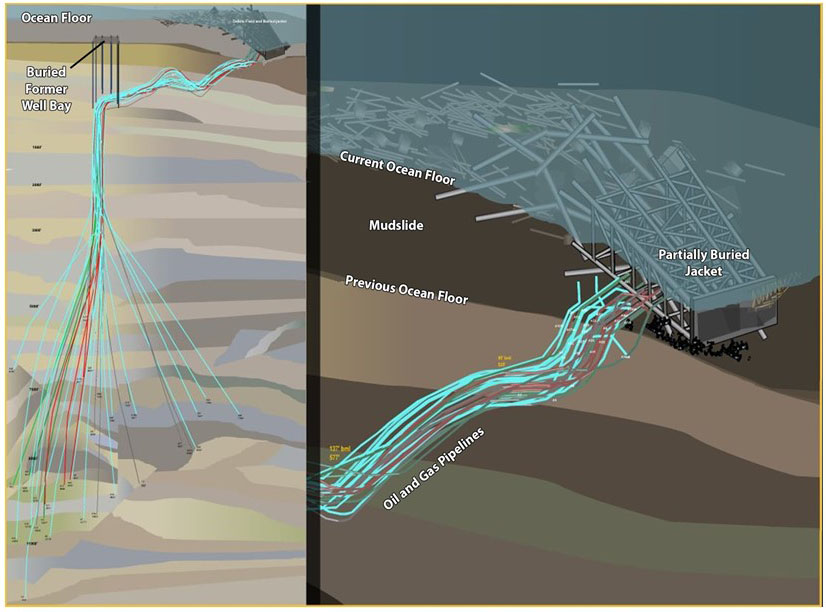 Figure 1. Illustration of the collapsed well jacket and damaged pipes from Taylor Energy’s Mississippi Canyon 20 Platform in the Gulf of Mexico. Credit: NOAA.

The MC20 site has since been associated with persistent plumes of oil and gas and surface oil slicks. These slicks are visible on the ocean surface from ships and by aerial and satellite remote sensing and have been used as a means of measuring the output of hydrocarbons from the site. However, it was determined that these estimates needed to be compared to collections and measurements from within the water column, along with sediment collection for chemical analysis. Additionally, because vigorous and persistent gas plumes have been observed at the site, we assessed the flux of hydrocarbon gas at the surface and into the atmosphere.

Benefits of Our Work
NCCOS scientists conclusively show that the plume is primarily from active oil and gas releases from multiple wells at the MC20 site, rather than from sediments contaminated after 2004. The team estimated oil flow rates to be 9–108 barrels (378–4,536 gallons) per day, depending on the method used to generate the estimate.

Based on the NCCOS assessment, and data from BSEE, the U.S. Coast Guard (USGC), and others, the USGC installed a containment and collection system at the MC20 site in the spring of 2019 that is currently collecting approximately 30 barrels (1,260 gallons) of oil per day.

This assessment work advanced NCCOS’s ability to measure oil flow rates, using a new, innovative application of acoustic technology, and the creation of a new device to estimate the flow rate of oil being released from the wells.

Next Steps
The Natural Resource Damage Assessment (NRDA) process assesses injuries to natural resources, and then determines the best methods to rehabilitate, replace, or acquire the equivalent of the injured natural resources and the services they provided. The goal of NRDA is to restore natural resources.

As a natural resource trustee for the MC20 site, NOAA and co-trustees are in the early stages of a NRDA process to determine if public natural resources have been harmed by the oil and gas release. This early stage is called “pre-assessment” and is ongoing.