Research Area(s): Coastal Change / Vulnerability and Risk Assessment; Stressor Impacts and Mitigation / Biological Effects of Contaminants and Nutrients
This project began in 2013 and will be completed in 2018

Many climate related variables such as temperature, pH, dissolved oxygen, and salinity can alter chemical toxicity. Most chemical testing is performed using a standard set of parameters.  We are expanding ecotoxicity testing to include a range of climate conditions to better predict chemical risk in coastal ecosystems. Our results indicate that the toxicity of chemicals such as pesticides, oil, and oil dispersants do vary with temperature and salinity. 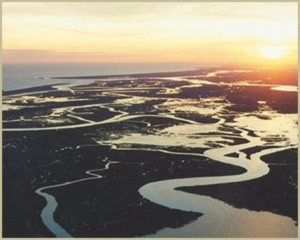 Estuarine systems are considered especially sensitive to climate change, as they are already subject to considerable stress from pollution, dredging, habitat loss, and other human disturbances.  Pesticides may enter estuarine waters from runoff of agricultural, golf course, and residential lawn treatments, and spray drift from mosquito control applications.  Oil and other industrial chemicals enter through road runoff and spills. Ecological risk assessments of chemicals use data from toxicity tests conducted under standard exposure conditions.  Variation in water temperature, pH, dissolved oxygen, and salinity may impact the toxicity of pollutants, both because of altered chemical fate and transport, and because of changes in physiological response. Standard toxicity bioassays may not provide enough information to assess the risks of chemicals in estuarine systems.

What We Did/Are Doing

We studied the effects of increased temperature and salinity, two potential impacts of global climate change, on the toxicity of pesticides to the estuarine grass shrimp, Palaemonetes pugio.  P. pugio is an abundant crustacean inhabiting tidal marsh habitats along the U.S. Atlantic and Gulf of Mexico coastlines. It is important to energy flow in the coastal ecosystem because it accelerates the breakdown of plants and serves as a prey item for many important recreational fish species. It is sensitive to numerous pesticides, making it an excellent species to test for toxic effects.

We exposed larval and adult grass shrimp to two commonly used pesticides in the coastal zone (the fungicide chlorothalonil and the insecticide Scourgeâ).  In the southeastern U.S., chlorothalonil is used primarily on home lawns and golf courses, whereas Scourge(R) is used primarily for mosquito control.  We exposed the grass shrimp under 1) standard toxicity test conditions, 2) an increase in temperature, 3) an increase in salinity, and 4) a combined increased temperature and salinity exposure.

Similarly, we tested the effect of increased temperature and increased salinity on the toxicity of four common weed killers, or herbicides (atrazine, irgarol, diuron, and ametryn) to the phytoplankton, Dunaliella tertiolecta.  Phytoplankton are important primary producers that serve as the base of aquatic food webs.  Phytoplankton can serve as an early warning system of ecosystem stress.

Ocean acidification is another major result of climate change and shell-forming organisms are particularly vulnerable to changes in oxygen and pH. We tested the toxicity of the insecticide resmethrin to larval clams under standard conditions vs. climate stress conditions of low dissolved oxygen conditions (hypoxia) and/or increased carbon dioxide levels to lower pH (hypercapnia).

We also determined the effect of salinity on the toxicity of two oil dispersants, Corexit and Finasol, in two estuarine species, grass shrimp and mud snails. Mortality and sublethal effects on adult and larval life stages of each species were assessed.

Resmethrin was eight-times more toxic to larval clams when combined with hypoxia than under normal dissolved oxygen conditions. Decreases in oxygen and increases in CO2, combined with resmethrin exposure, caused a significant increase in mortality in larval clams compared with standard conditions. Hypoxia exposure was observed to decrease larval swimming activity and clam larvae exposed to high CO2 appeared to have thinner shells with irregular edges.

Our results indicate that the chemicals tested thus far were generally more toxic under climate stress conditions. The extent and direction of toxicity change depends on the specific chemical, estuarine species, and life stage involved.

We are continuing to investigate the impacts of climate variables on chemical toxicity.  We are expanding the suite of estuarine organisms tested to include larval fish and sea urchins. We are interested in learning more about the sublethal effects occurring with multi-stressor exposures such as cellular enzyme activity, growth, and development. We also plan to expand the study to include other chemical contaminants and other water quality variables related to climate change.

The resilience of estuarine organisms to environmental change will determine the future health of our coastal ecosystems. Improved strategies for pollution reduction and habitat protection may help mitigate multi-stressor effects. By expanding ecotoxicity testing conditions, we may be better poised to protect sensitive estuarine ecosystems, both now and in the face of a changing global climate.