Numerous studies have increased understanding of processes that lead to algal bloom initiation, growth, and transport but little is known about the causes of bloom decline and termination. Preliminary results suggest toxic Alexandrium may initiate programmed cell death in response to nutrient stress. A hypothesis is that an internal cell death pathway contributes to the decline of blooms. This project investigates if programmed cell death occurs in Alexandrium and if it is important in field populations. 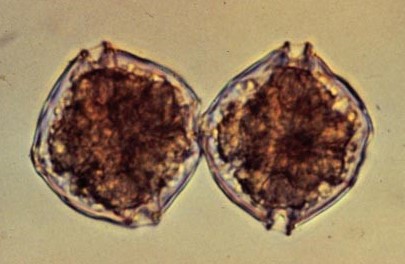 The toxic dinoflagellate Alexandrium tamarense is responsible for outbreaks of paralytic shellfish poisoning, one of the most widespread HAB syndromes. Understanding Alexandrium bloom dynamics requires information on both growth and mortality. Considerably more quantitative information is available on the factors that influence Alexandrium growth than mortality. As a consequence, current models are poorly parameterized with respect to Alexandrium mortality. The general assumption is that grazing is the main source of mortality for any phytoplankton species. However, bacteria, viruses, and parasites could also play a significant role, especially when blooms are quite dense. Evidence for programmed cell death (PCD), or cell death by an internal biological process, has also been found in a number of phytoplankton species, providing an addition potential mortality term. This project investigates whether programmed cell death occurs in Alexandrium and whether the process is quantitatively important in a (relatively isolated) field population. Nutrient stress is hypothesized to be the primary trigger for Alexandrium cell death.

We are supporting a research team at the University of Texas Marine Science Institute led by Dr. Deana Erdner. The overall goal of this project is to evaluate the relationship between nutrient stress, PCD, and encystment in Alexandrium by (1) documenting the PCD process in Alexandrium, including the genetic, biochemical, and morphological changes that occur; (2) identifying the triggers of PCD in Alexandrium;  (3) investigating the link between PCD and the encystment process; and (4) assessing the presence and magnitude of PCD in a natural Alexandrium bloom.

A suite of genetic and biochemical assays will be used to determine the existence of the PCD process in Alexandrium under conditions that result in nutrient stress or encystment. These include measures of caspase activity, DNA fragmentation, maintenance of membrane integrity, inversion of phosphatidylserine in the cell membrane, and metacaspase gene expression. These analyses will also be used with natural bloom populations, to assess the role of PCD in bloom decline in situ.

This project is supported by the NCCOS Ecology and Oceanography of Harmful Algal Blooms Program (ECOHAB).