The increasing demand for American-grown seafood and improved technology to farm in the open ocean provides incentive for aquaculture expansion. A recent step toward domestic aquaculture development was the Presidential Executive Order Promoting American Seafood Competitiveness and Economic Growth issued in May 2020, which designated NOAA as the lead agency to support the identification of 10 Aquaculture Opportunity Areas (AOAs) over the next five years in various regions of the U.S. An AOA is a small defined geographic area that has been evaluated to determine its potential suitability for commercial aquaculture. Moving forward, NOAA will use a combination of scientific analysis and public engagement to identify areas within the AOAs that are environmentally, socially, and economically appropriate for commercial aquaculture. 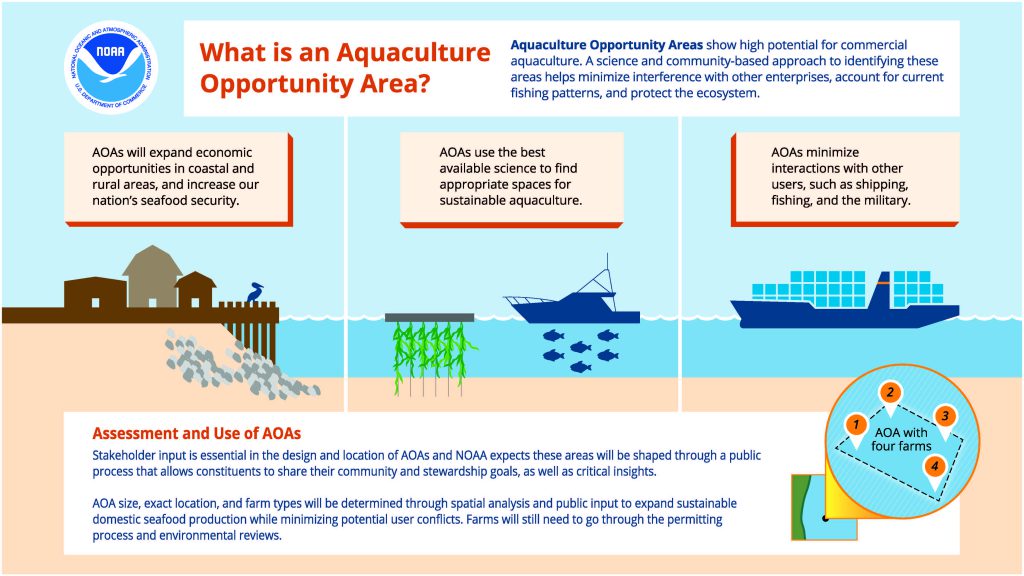 Why We Care
Seafood farming, if done responsibly — as it is in the U.S. — is increasingly recognized as one of the most environmentally sustainable ways to produce food and protein. Marine aquaculture is a resource-efficient method of increasing and diversifying U.S. seafood production that can expand and stabilize U.S. seafood supply in the face of environmental change and economic uncertainty.

The global human population is rising, but the global abundance of wild fish is not. NOAA Fisheries and its partners have made good progress toward ending overfishing in the United States through sound, science-based management practices, but wild fish harvests cannot meet current seafood demands. By expanding seafood farming we can ensure a safe, secure, and sustainable local seafood supply.

What We Are Doing
The goal of the Aquaculture Opportunity Areas (AOAs) is to gather comprehensive stakeholder input and conduct rigorous spatial planning analyses to minimize use conflicts and complete advanced environmental review. The resulting Atlases include technical information that may be used to support decision makers in identifying areas that may be suitable for locating AOAs. NOAA developed this process in coordination with cooperating federal agencies, regional fishery management bodies, state governments, tribal authorities, and various stakeholders. Marine spatial planning efforts included a suitability analysis followed by precision siting to ensure that potential impacts to sensitive species and habitats, as well as other marine industries, would be minimized.

What We Found
For the first phase of AOA identification (year 1), NOAA has developed two marine spatial aquaculture atlases to identify regions that might be suitable for locating AOAs in two regions: the U.S. Southern California Bight and the Gulf of Mexico. The Atlases were developed based on best available science and through extensive public engagement and provide the most comprehensive marine spatial analyses ever developed for any U.S. ocean space. Each Atlas used spatial modeling with over 200 data layers that characterize ocean neighborhoods and identified many options in each region that may be highly suitable for AOA development.

Next Steps
It is important to note that the Atlases do not designate AOAs, but are instead an important step to provide peer-reviewed spatial mapping that informs the site selection process. Following the release of the two Atlases, NOAA Fisheries will host a public comment period and will coordinate discussions with regional and national stakeholders. The decision to identify an AOA will only be made after completion of the National Environmental Policy Act (NEPA) process and consideration of the information presented in a programmatic Environmental Impact Statement (PEIS). Over the next four years, eight additional Aquaculture Opportunity Areas will be identified around the nation.