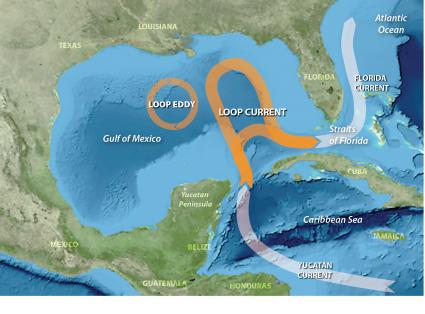 The Loop Current takes various tracks, sometimes moving fairly directly from the Yucatan Peninsula to the Florida Straits and sometimes forming a large loop that extends into the northern Gulf. (Credit UCAR and NASA)

The Loop Current in the Gulf of Mexico, a dominant oceanographic feature, often intrudes far into the Gulf, shedding clockwise circulating eddies. NCCOS-funded marine scientists with the University of South Florida are working to explain the cause of Loop Current intrusion and eddy formation, which are not well-understood, as the behavior of the Loop Current is of regional ecological importance.

The Loop Current is an area of warm water that travels up from the Caribbean between the Yucatan Peninsula and Cuba (as the Yucatan Current) and into the Gulf of Mexico. As the current exits the Gulf through the Straits of Florida (as the Florida Current) it meets the Antilles Current to form the Gulf Stream. The Loop Current may either intrude far into the Gulf of Mexico or take a more direct path to the Atlantic Ocean.  Oceanographers have conducted numerous theoretical investigations of the control mechanism for intrusion and eddy formation versus direct exit to the Gulf Stream.

This shows the importance of the West Florida Shelf (WFS) in controlling Loop Current behavior. When the Loop Current meets the shallow waters of the southwest corner of the WFS near the Dry Tortugas (termed a “pressure point”), it becomes “anchored” and flows more directly through the Florida Straits. Loop Current anchoring stimulates upwelling of nutrient-laden deeper water into the WFS and facilitates ecologically significant activities such as transport to nearshore of gag grouper larvae, Karenia brevis red tide, and the movement of Deepwater Horizon oil (all research NCCOS funded). 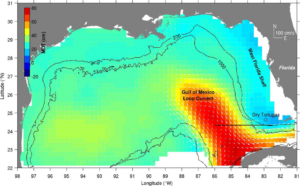 A composite Self-Organizing Map image of Loop Current intrusion into the Gulf of Mexico based on mean dynamic topography and calculated surface geostrophic velocity vectors. The deep Gulf of Mexico is distinguished from the coastal ocean (e.g., West Florida Shelf) by the 200 and 1,000 meter bathymetric contours. The Dry Tortugas ” pressure point” is shown as an open circle. (Credit R. Weisberg and Y. Liu, USF)

The study reveals that when the Loop Current strays from the WFS it becomes “unanchored” and released, penetrating northward into the Gulf and shedding anticyclonic (clockwise) flowing eddies. These intrusions and eddies can travel as far north as the Mississippi River Delta and as far west as Texas.

The study is supported by the NCCOS Prevention, Control, and Mitigation of Harmful Algal Blooms Program (PCMHAB). Some earlier project findings are reported here.