Toxic Alga Dinophysis an Emerging Threat to Human Health and Fisheries in U.S.

The toxic dinoflagellate alga Dinophysis threatens human health and coastal economies through the production of toxins which cause diarrhetic shellfish poisoning (DSP) in humans. Although North American waters have historically been free of Dinophysis blooms and associated DSP poisoning events, Dinophysis species can be a common component of marine phytoplankton. Increasing documentation of Dinophysis blooms and toxins in North American waters over the last few decades represents an emerging threat to human health and fisheries in the United States (Hattenrath-Lehmann et al., 2013, Trainer et al., 2013).

NCCOS sponsored research evaluated the growth response of two Dinophysis algal species, its photosynthetic and bloom-forming ciliate prey, Mesodinium rubrum, and the cryptophyte algal prey Teleaulax amphioxeia at a range of temperature, salinity, and irradiance treatments to identify possible environmental drivers of Dinophysis blooms in the Gulf of Mexico.

Outbreaks of DSP are the result of toxin accumulation in the tissues of filter-feeding shellfish like mussels and oysters, specifically okadaic acid and the dinophysistoxins produced by species of marine dinoflagellates in the genus Dinophysis and some benthic species of Prorocentrum. Though usually not fatal, the prevalence of DSP events worldwide represents a considerable threat to not only human health, but coastal economies due to harvesting restrictions when toxin concentrations in shellfish exceed regulatory limits. Blooms of Dinophysis and associated DSP poisoning events are a challenge for shellfish fisheries and aquaculture.

The study notes previous research showing both Dinophysis species and M. rubrum, though capable of surviving for days to weeks without prey, must consume prey for long-term survival (i.e., they are obligate mixotrophs). The species must sequester (i.e., “steal”) prey chloroplasts and nuclei to survive in a process called kleptoplasty (see YouTube video by M.G. Park of Dinophysis feeding process). 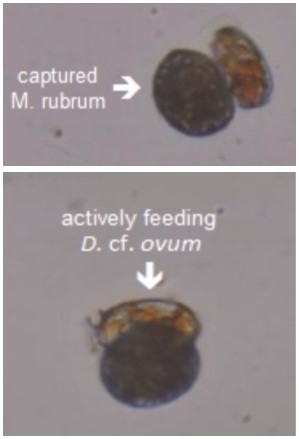 Mesodinium rubrum (dark cell) captured by Dinophysis cf. ovum. After capture, cells of D. cf. ovum remain attached to their prey for tens of minutes up to two hours, while draining their content with the aid of a feeding tube (peduncle) until complete prey emptying or, sometimes, its collapse. Modified from Mafra Jr. et al. 2016.

Other findings of the study include:

Published in the journal Harmful Algae, the results of this work will improve forecasting and mitigation efforts for blooms of Dinophysis by revealing conditions during which blooms of these organisms are most likely to occur, especially in the Gulf of Mexico.

This research was sponsored in part through the NCCOS ECOHAB project Multidisciplinary Approach to a Cross-Regional Problem: Dinophysis and DSP Toxicity led by Dr. Juliette Smith, Virginia Institute of Marine Science, College of William & Mary.

NOAA Science Along Our Shores (Video)