Home > news > Summer 'Dead Zone' Smaller than Average in Gulf of Mexico
Scientists from LUMCON and NOAA collect oxygen measurements to determine the size of this year's dead zone in the Gulf of Mexico. Credit: NOAA

Summer 'Dead Zone' Smaller than Average in Gulf of Mexico

NOAA-supported scientists, led by partners at the Louisiana Universities Marine Consortium (LUMCON) and Louisiana State University, have determined that this year’s Gulf of Mexico “dead zone”—an area of low oxygen that can kill fish and marine life—is approximately 2,720 square miles, an area about the size of Delaware. This is considerably smaller than the 5,460-square-mile average measured over the past 34 years. The hypoxic zone was affected by strong winds and waves this year, as the zone dynamically changes through the summer and is reduced during storm events and strong winds, taking 1–2 weeks of typical wind and wave conditions to return to its full size. The scientists collected data to determine the size of the dead zone during a survey mission aboard the R/V Pelican from July 23 to 28 and were funded through NOAA’s National Centers for Coastal Ocean Science. 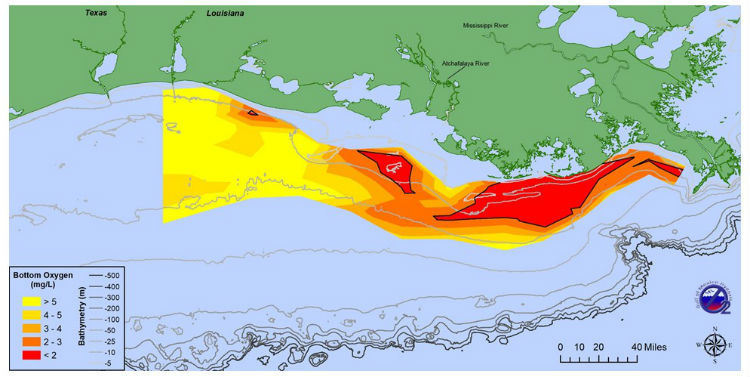 At 2,720 square miles, an area about the size of Delaware, this year's dead zone in the Gulf of Mexico is smaller than average. The map shows the distribution of bottom-water dissolved oxygen taken during a research cruise from July 24 to 28. Credit: LSU and LUMCON.

This summer’s dead zone demonstrates the importance of continued monitoring to understand how ocean conditions influence the zone size, maintaining ongoing summer surveys and using a 5-year average. The 5-year average helps account for only having a single measurement that may not capture the maximum size, as the cruise is only a snapshot of the dynamic hypoxic zone. Having a long-term record of the size of the gulf dead zone is foundational in forecasting its size, trends and impacts. This informs resource managers tasked with mitigating the impacts of hypoxia to the sustainability and productivity of our coastal resources and economy.