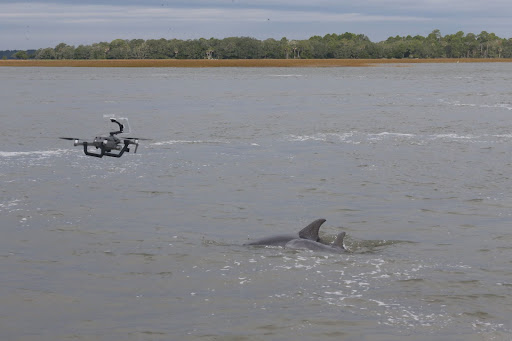 "Snotbot" drone flying close to the blow of a bottlenose dolphin.

Collecting samples from the blow, or exhalations, of large whales using Unmanned Aircraft Systems (UAS), i.e. drones, is nothing new. However, collecting blow from smaller dolphins in an estuarine environment has and has rarely been attempted, and proven challenging. With the help of staff from Ocean Alliance (Chris Zadra), College of Charleston GMBP graduate student Colin Perkins-Taylor, and NCCOS’ Wayne McFee spent one day on land and three days on the water testing the Ocean Alliance’s "Snotbot" drone to collect blow samples in the rivers and creeks near Charleston, SC.

The Snotbot is fixed with four square petri dishes and strategically flown either through the blow or held downwind on windy days to capture the spray from the blow. A total of 14 samples were collected in the four days, potentially allowing for the detection of pathogen DNA that affects respiratory health, the leading cause of morbidity/mortality in dolphins. Water and air samples for eDNA analyses were also collected at the site of blow collection for comparison. This project shows promise to detect respiratory pathogens via drone technology and will provide a better understanding of the environment in which dolphins live.

Predicting the Risks of Harmful Algal Blooms for Coastal California