The NCCOS sponsored project, Modeling Reproductive and Population Impacts of Hypoxia in the Northern Gulf of Mexico, led by the University of Texas at Austin, is investigating the impacts of low levels of dissolved oxygen on the brain functions of the Atlantic croaker, a common estuarine and coastal fish inhabiting the east coast of the United States. Although relatively hypoxia-tolerant, Atlantic croaker living in the dead zone of the northern Gulf of Mexico can suffer severe and widespread impairment of reproductive and endocrine functions. 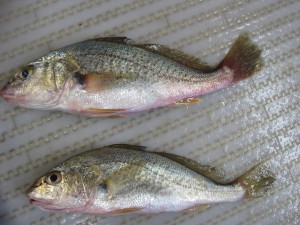 The new study explains the influence of antioxidants and steroids on reducing pathological impacts of low oxygen on an aquatic vertebrate animal. In vertebrates such as Atlantic croaker, low levels of dissolved oxygen (called hypoxia — below 2 mg/L) and insufficient antioxidant levels in the brain result in the initiation of a complex series of pathological changes leading to decreased energy levels and disruption of neuroendocrine (hormone) functions. Harmful responses were diminished after exposure of the fish to the antioxidant vitamin E and estrogens (female reproductive hormones) restoring reproductive endocrine functions.

The study demonstrates for the first time in an aquatic vertebrate, that hypoxia increases highly chemically reactive radicals of oxygen (e.g., nitric oxide and the super oxide radical) causing oxidative damage to cells and inhibiting protein expression in the hypothalamus, an important integrative center in the fish brain. In addition, the results show that during hypoxic stress, administration of Vitamin E or related Vitamin E2 leads to reduced oxygen radical formation in the fish brain, reversing neurological malfunction. This is the first evidence of Vitamin E and Vitamin E2 reversing hypoxia-induced formation of free radicals in a fish brain. The study is published in the scientific journal Comparative Biochemistry and Physiology, Part A .

Predictions differ about size of 2012 'dead zone' in Gulf of Mexico | NOLA.com