NCCOS-supported scientists have determined that this year’s Gulf of Mexico “dead zone”—an area of low oxygen that can kill fish and marine life—is approximately 2,116 square miles, equivalent to 1.4 million acres of habitat potentially unavailable to fish and bottom species. The measured size of the dead zone is the third smallest in the 34-year record of surveys. This measurement brings the five-year average to 5,408-square miles, which is 2.8 times larger than the 2035 target set by the Mississippi River/Gulf of Mexico Hypoxia Task Force (HTF). 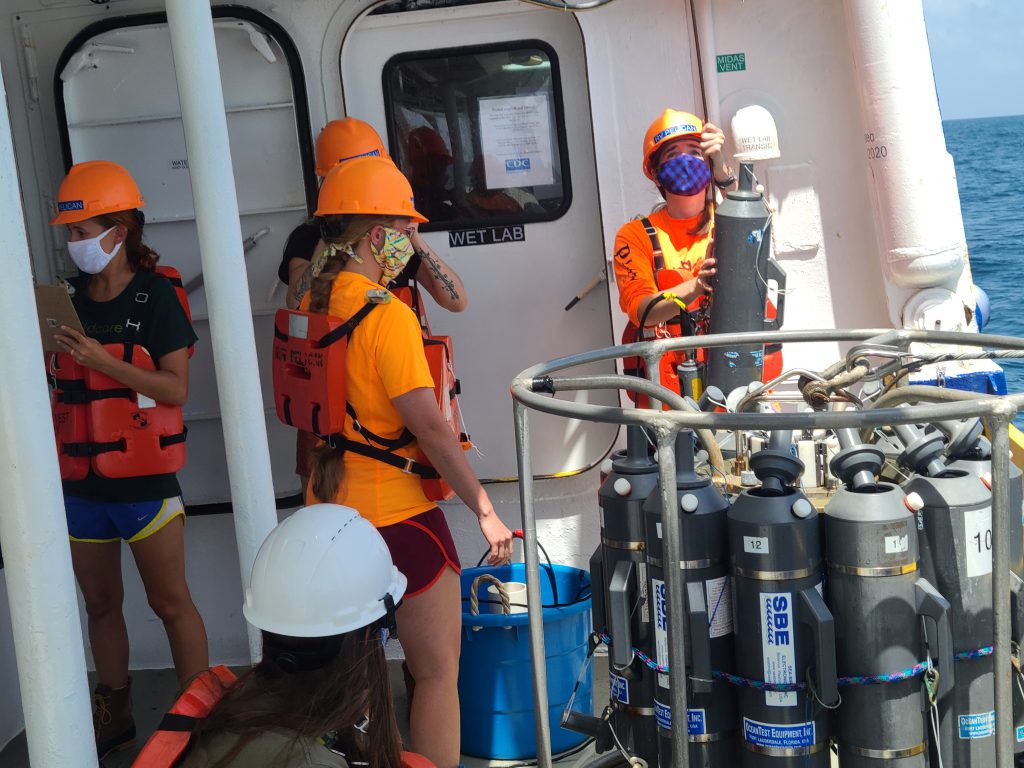 Scientists collect oxygen measurements to determine the size of this year's dead zone, an area of low oxygen that can kill fish and marine life. (LUMCON/LSU)

The annual dead zone survey was led by scientists at Louisiana State University and the Louisiana Universities Marine Consortium (LUMCON) during a research cruise from July 25 - August 1 aboard the LUMCON R/V Pelican.

In June 2020, NOAA forecasted a larger than average hypoxic zone of 6,700 square miles. However, Hurricane Hanna passed through the central and western Gulf days prior to the research cruise and mixed the water column, disrupting the hypoxic zone which forms in the coastal ocean west of the Mississippi River delta. The size of the hypoxic zone fluctuates naturally throughout the summer, and it usually forms again within days or weeks after the passage of storms.

The HTF uses the annual hypoxic zone size determination as a key metric to measure progress toward achieving the five-year average target of 1,900 square miles or smaller by 2035. This summer’s dead zone demonstrates the importance of continued monitoring to understand how ocean conditions influence the zone size. Maintaining ongoing summer surveys and calculating a five-year average allows scientists to capture the true dynamic nature of the zone more than a single annual measurement.

Exposure to hypoxic waters has been found to alter fish diets, growth rates, reproduction, habitat use, and catchability. NOAA continues to fund monitoring and research efforts to understand the impacts of hypoxia on fish and fisheries in the Gulf of Mexico through its Northern Gulf of Mexico Ecosystems and Hypoxia Assessment (NGOMEX) program. Data from this cruise are also used by NOAA and its partners to refine models to more accurately simulate the relationships between river discharge, nutrient loads, and oceanographic conditions that can cause and sustain hypoxic conditions.

For more information about the 2020 Gulf of Mexico dead zone, watch this quick video or read the NOAA Press Release. 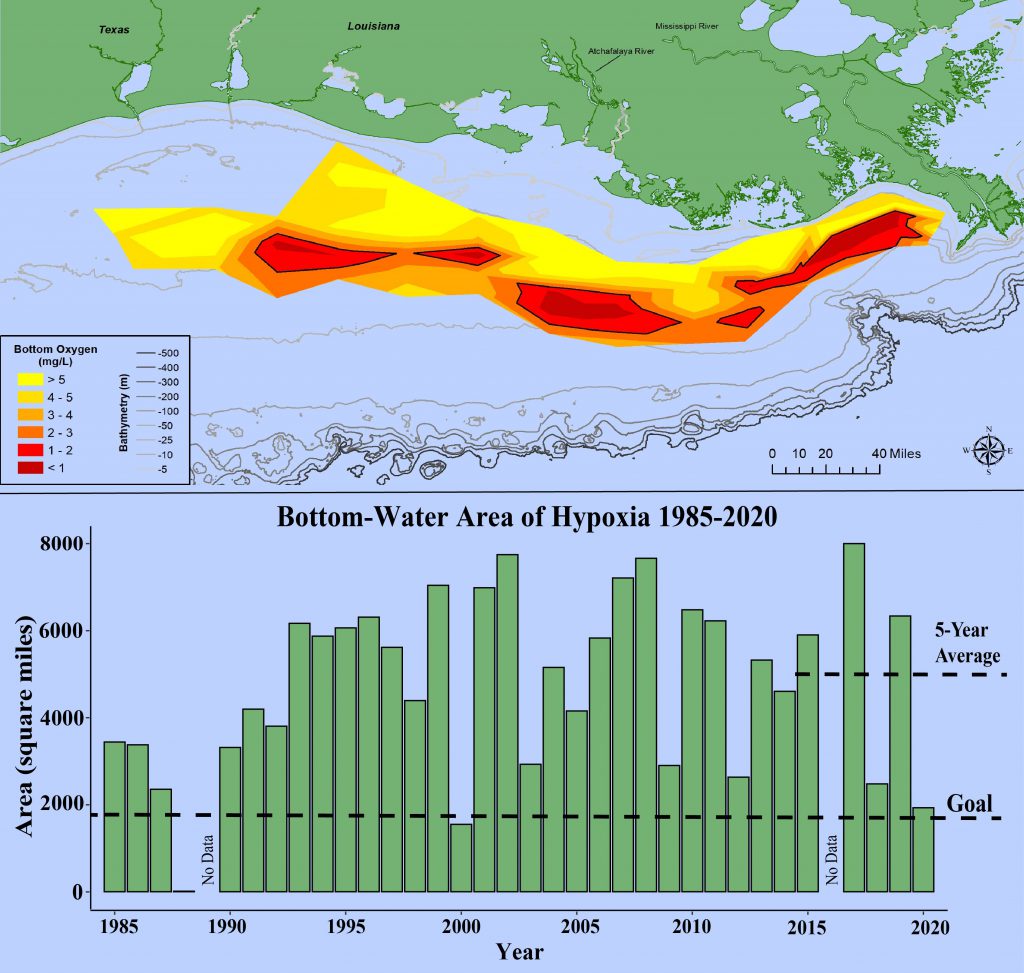 At 2,116 square miles, this year’s hypoxic zone in the Gulf of Mexico is the 3rd smallest ever measured in the 34-year record, measured from July 25 to August 1. Red area denotes 2 mg/L of oxygen or lower, the level which is considered hypoxic, at the bottom of the seafloor.
(Bottom) Long-term measured size of the hypoxic zone (green bars) measured during the ship surveys since 1985, including the target goal established by the Mississippi River/Gulf of Mexico Watershed Nutrient Task Force and the 5-year average measured size (black dashed lines).