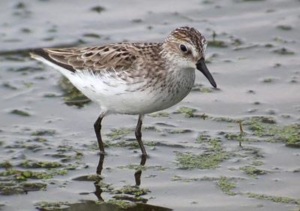 A new NCCOS-sponsored study shows that using artificial structures to protect coastal land and property from the sea can harm water birds. The research, conducted in Chesapeake Bay and published in Estuaries and Coasts, found that “armoring” shoreline with barriers such as seawalls or riprap (rubble) can reduce habitat that birds use to forage, rest, and raise their young.

A few of the bird species studied, like mallard ducks, were able to adapt to the altered shoreline, but most of the bird species surveyed were sensitive to change and fared poorly in locations with large coastal development. Past NCCOS-funded research has shown that shoreline hardening also negatively affects many species of fish, shellfish, and aquatic plants.

Throughout the world, coastal communities are increasingly turning to shoreline hardening to protect infrastructure from sea level rise, storm surge, and erosion. In the U.S., approximately 14 percent of the shoreline is hardened, and researchers project this percentage will double by the year 2100. Shoreline hardening or armoring typically involves installation of artificial structures such as
concrete or steel walls, or riprap borders consisting of large stones or boulders. 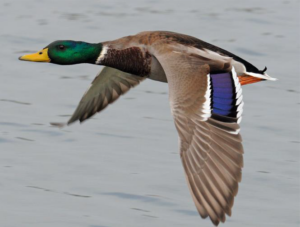 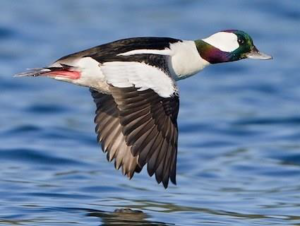 Many water birds, such as the sandpiper (above) and the bufflehead duck (below), are sensitive to shoreline hardening, which reduces their habitat for foraging, resting, and raising their young. Credit: D. Prosser, USGS.

NCCOS, along with other NOAA offices, is working to communicate to coastal communities the benefits of using natural and nature-based features for shoreline stabilization as an alternative to hardening (see Government Regulators Consider Negative Impacts of Shoreline Armoring, NOAA Releases Guidance for the Use of Living Shorelines, and Living Shorelines infographic and webpage).

NCCOS in the Caribbean: Will Sautter Field Blog