Sediment and Algae Color the Great Lakes : Image of the Day 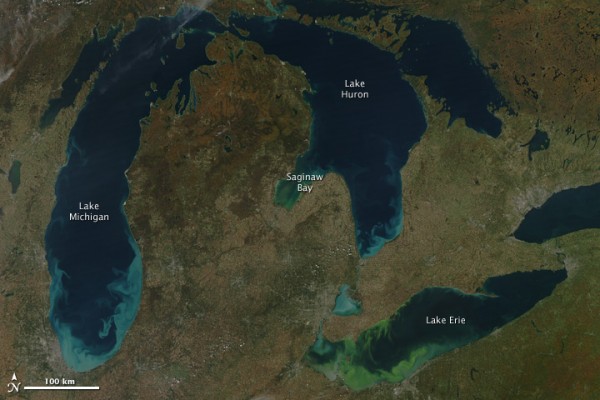 The brilliant streaks of blue and green that color the Great Lakes in this image are a contradiction. The blue in Lake Michigan and Lake Huron is sediment brought to the surface when strong winds churned the lakes. The green in Lake Erie and in Lake Huron's Saginaw Bay is algae, which builds on the surface when winds are calm.

Sediment most often colors the Great Lakes in the spring and fall when transitioning weather patterns bring storms and strong winds. The winds stir the water, pulling quartz sand and silt from the lake bottom to the surface, says Richard Stumpf, an oceanographer with the National Oceanic and Atmospheric Administration. The white sand looks milky blue when viewed through the water from space. It is a good tracer, says Stumpf, illustrating how circulation in the lake moves material from the banks to the center.

The display of color isn't limited to the lakes. Touched by autumn, the forests around the lakes have turned orange.