Risk of Shellfish Toxicity Predicted by Temperature and Salinity

A new study shows that water temperature and salinity can indicatethe likelyoccurrenceof toxicAlexandrium blooms (a type of harmful algae) in the U. S. Pacific Northwest. As shellfish become contaminated with the toxins produced by these harmful algal blooms (HABs), researchers and shellfish managers can use these findings to predictshellfish toxicity, which causes illness or even deathwhen consumed byhumans.

In the Salish Sea region of the Pacific Northwest (the Puget Sound, Strait of Juan de Fuca, Strait of Georgia),Alexandrium bloomsare common. Bymeasuring the growth rates of two Alexandrium isolates at a range of temperatures (T) and salinities (S), researchers foundoptimal T and S ranges, or windows, for where and when Alexandrium will grow. Based on the findings, in the Salish Sea, the optimal conditions for Alexandrium growth and risk of shellfish toxicity occur between April and November, though this window only indicates the potential of a HAB to form rather than a guaranteed bloom. 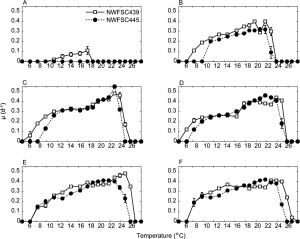 In addition to usefulness under current conditions, the identified T and S windows can serve as indicators of the potential for Alexandrium blooms under future climate change scenarios.

This study is part of the NCCOS ECOHAB project Modeling Favorable Habitat Areas for Alexandrium catenella in Puget Sound and Evaluating the Effects of Climate Change. Additional support for the study was provided by the National Science Foundation and the National Institute of Environmental Health Sciences.