An NCCOS-funded study has produced a detailed characterization of the deep (60–80 meters), mesophotic reefs and fish populations of Pulley Ridge, located off the southwest coast of Florida. While the study shows a decade-long decrease in coral cover at Pulley Ridge, when compared with data collected by the U.S. Geological Survey in 2003, the findings also show that current Pulley Ridge coral populations are primarily new recruits, offering hope that this coral community is recovering. The Pulley Ridge Habitat Area of Particular Concern (HAPC) has experienced a 92 percent loss of coral cover in this 10-year span.

Also of positive note, the report was completed before the 2014 research expedition, in which large coral fields were discovered adjacent to the Pulley Ridge HAPC. This newly discovered coral area may have the densest cover of Agariciaplate corals known in the Gulf of Mexico. Unfortunately, videos also revealed an abundance of invasive lionfish in most Red grouper burrows on Pulley Ridge, representing an increase in the lionfish population since they were first observed on Pulley Ridge in 2010. Pulley Ridge is the deepest known photosynthetic coral reef in continental U.S. waters. 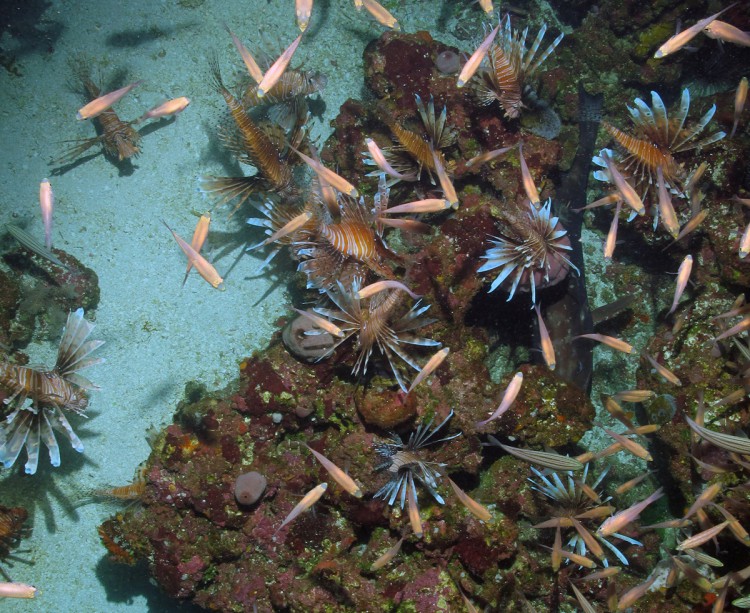 The invasive lionfish has been found in increasing numbers in Red grouper burrows at Pulley Ridge. A quick count at just one burrow during the 2014 field season revealed 67 of the venomous Pacific species, and potentially thousands over all of Pulley Ridge. Credit: Coral Ecosystem Connectivity 2014 Expedition.

The project, led by the University of Miami, represents a collaboration of over 35 scientists at 11 different universities pooling their expertise with state and federal agency scientists through NOAA’s Cooperative Institute for Marine and Atmospheric Studies at the University of Miami in coordination with the Cooperative Institute for Ocean Exploration, Research, and Technology at Florida Atlantic University. The Florida Keys National Marine Sanctuary’s Advisory Council and the Gulf of Mexico Fishery Management Council will review results from this field effort to determine management actions necessary for sustaining coral reef communities upstream and downstream of Pulley Ridge.