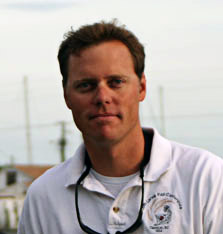 Three NOAA scientists were named today as recipients of the 2010 Presidential Early Career Award for Scientists and Engineers (PECASE). The award is the highest honor given by the U.S. government to outstanding scientists and engineers in the early stages of their careers.

"It is very gratifying that NOAA scientists are honored by this significant award," said Jane Lubchenco, Ph.D., under secretary of commerce for oceans and atmosphere and NOAA administrator. "We are immensely proud of these three individuals. They represent the best of NOAA science. While they are being lauded for specific work, this award also recognizes the promise of future contributions to science and the nation."

Morris is being honored for his research on invasive species and marine aquaculture. His studies of invasive lionfish in the western Atlantic and Caribbean have helped marine ecologists better understand how lionfish physiology is driving the invasion. His studies have helped define the ecological impact of lionfish on reef fish communities and better understand the global threat lionfish pose to biodiversity. In addition, he has contributed significantly to development and improvement of low-impact aquaculture practices for coastal areas.