Predicting the Socioeconomic Impacts of Shoreline Armoring in Oregon

The tradeoffs between protection of private property and management of the public commons along coastlines are a source of increasing conflict given the threats posed by erosion and sea-level rise. An NCCOS sponsored research simulation study on shoreline armoring policy from 1990 to 2015 in the state of Oregon predicted an estimated 69 percent increase in private property shoreline armoring without regulation.

A primary tool for coastal adaptation to climate change is the hardening, or armoring, of the shoreline to mitigate the effects of erosion and sea-level rise (SLR). When such decisions are made at the individual parcel-level, there is potential for broader impacts due to deflected wave action and adjacent owner response behaviors to defend their property from increased erosion. Hardening of shorelines has also disclosed negative ecological effects. 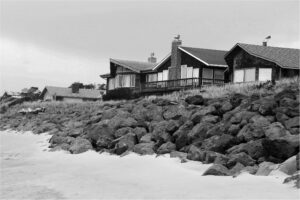 The pressure to harden shorelines is great and will only increase with potential damages from SLR. In the United States, costs are predicted up to 9.3 percent of GDP by 2100, absent adaptation (Hinkel et al., 2014). Displacement of over 13 million people is possible due to inundation (Hauer et al., 2016). The severity of these threats have increased action for decision-relevant science to improve adaptation planning and better understanding of coastal adaptation decisions. This study fills a gap in economists’ understanding of how private adaptation incentives and land-use policies may influence the temporal and spatial pattern of economic investments to mitigate current and future coastal SLR risks.

The private landowners’ decision to adapt to coastal risk is influenced by physical factors such as erosion rates, elevation, and the location of homes or other structures relative to ocean wave action. Decisions of neighboring landowners may also influence the adaptation choice. 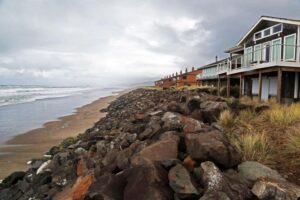 This study developed a model of private landowner armoring choices from 1990 to 2015 in the state of Oregon, The study suggests the impacts of spatial “spillovers” from armoring are highly influential determinants in private adaptation decisions. Using scenario-based simulations, the study demonstrated that the removal of a current Oregon land-use regulation limiting armoring (i.e., taking a more laissez-faire policy) has potential to significantly increase future armoring by 69 percent. Furthermore, inclusion of SLR projections suggests armoring would increase an additional 5.4 percent within four decades.

This study, supported in part by NCCOS and published in the Journal of Environmental Economics and Management, is from the NCCOS socioeconomics project A Multidisciplinary, Integrative Approach to Valuing Ecosystem Services from Natural Infrastructure.