Declines in oxygen levels of coastal waters have accelerated in recent decades creating 'dead zones' not only in more publicized nearshore areas but in open ocean offshore regions of the continental shelves and slopes. Once treated as separate phenomena and distinct fields of study, scientists now see offshore and coastal hypoxia as interconnected, resulting in complex ecological responses. 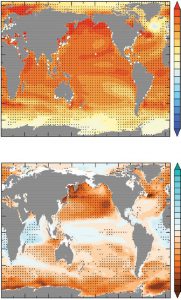 Top. Coastal hypoxia and predicted change in sea surface temperature. Vertical scale is change in the number of degrees Celsius from 0.0 to 4.0 (temperature increases 0.0 to +4.0, yellow to red; temperature decreases 0.0 to -4.0, blue to purple). Bottom. Predicted change in oxygen concentration at 200-600 meters. Vertical scale is number of molecules of oxygen in a micromole. Dissolved oxygen increases 0 to +50 micromoles, white to green; dissolved oxygen decreases 0 to -50 micromoles, pink to dark red. (Credit: L. Levine and D. Breitburg via permission of K. Gedan and L. Bopp)

Scientists sponsored by NCCOS are studying the causes, interconnections, and impacts of hypoxia. Along with other members of the scientific community, they are finding that climate change caused by increasing carbon dioxide levels is lowering pH (increasing acidity) and calcium carbonate concentrations, warming water temperatures, and increasing dead zones in both realms. Both coastal and deeper ocean hypoxia are predicted to worsen with increasing global temperatures.

A commentary on and the latest scientific review of increasing oxygen loss in both the ocean and coastal waters is published in the journal Nature ClimateChange.