The California Current System (CCS) is among the most biologically productive regions of the world's oceans, but upwelling of coastal waters creates vulnerability to ocean acidification and hypoxia (OAH), which scientists observed in recent decades. A project funded through the NOAA Ocean Acidification Program and NCCOS in collaboration with the California Ocean Protection Council is underway to understand the relative contributions of natural climate variability, human-induced climate change, and land-based nutrient and carbon inputs on the trends of OAH in the CCS. The project also hopes to identify "hot spots," or areas particularly susceptible to OAH and how that susceptibility may change between now and 2060. 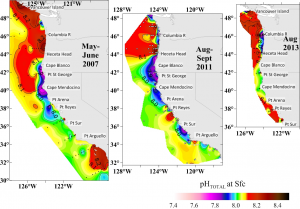 The meeting provided an avenue for technical and stakeholder advisory groups to work with the project team from the outset to relay the modeling approach, educate stakeholders, and get early buy-in on the modeling tools under development. This strategy hopes to ensure that both the managers and their respective scientific advisors become vested in the potential application of model outputs to inform management decision-making and understand the model prediction uncertainties.

Attendees included representatives of California state government water boards and fish and wildlife agencies, the city of San Diego, Ventura County, Los Angeles County, Orange County, and the Environmental Protection Agency. The intended project outcome will inform managers and their scientific advisors enabling them to use model outputs to take management actions if needed. This meeting represents the first of many stakeholder interactions which will occur over the term of the project.