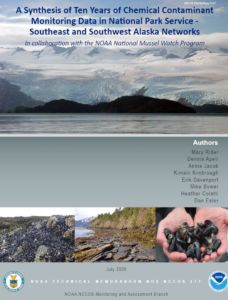 Based on contaminant accumulation in bay mussels (Mytilus trossulus) collected by the National Park Service and their partners, the report discusses concentrations and distribution of organic chemicals and heavy metals in the parks’ coastal waters. When Mussel Watch scientists compared contamination levels in the parks to long-term NOAA National Status and Trends monitoring data they found background levels for the majority of the contaminant concentrations in the parks.

With no known industrial point sources of contamination in the region, the presence of persistent organic pollutants in these remote national parks could be linked to maritime activities associated with commercial and recreational fishing, commercial shipping, and the “grasshopper” effect (a geochemical process resulting in the long-range atmospheric transport of chemicals from warmer to colder regions of the earth).