An algal bloom deadly to fish and shellfish was discovered in August 2011 in Great South Bay, Long Island, and grew after Hurricane Irene drenched the region. 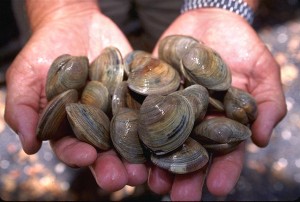 A NOAA-funded researcher at the State University of New York-Stony Brook will document the algae and test a promising technique to control future blooms, which threaten to undo a multi-million-dollar project led by The Nature Conservancy to restore hard clams in the bay. The study will help set the stage for use of clay treatments to reduce the severity of such blooms.

There was hope that Irene's severe winds and rain would weaken or end the bloom. But surveys of Great South Bay completed just a few days after the storm by Dr. Gobler and the Suffolk County Health Department showed high density patches of bloomingC. polykrikiodesover an even greater extent of the bay.Responders will continue weekly cruises to document its size, extent and toxicity. Additional targeted studies will test bloom impacts on hard clams (Mercernaria mercenaria),determine impacts on benthic populations, and explore feasibility of using clay to mitigate future blooms.

Experience withC. polykrikiodeselsewhere suggests blooms are likely to re-occur in Great South Bay, the site of a multi-million dollar shellfish restoration effort led by The Nature Conservancy of Long Island to rebuild the once robust hard clam population. Since 2004, the organization has maintained shellfish sanctuaries in their 13,400 acre Great South Bay tract and conducted surveys to monitor planted shellfish, spawning success, and water quality.

"It is great that NOAA is able to mobilize so rapidly to assist with the characterization of this bloom and to help identify actions that are most likely to prevent these blooms in the future,' said Carl LoBue, Senior Marine Scientist at The Nature Conservancy (TNC) and leader of its Great South Bay shellfish restoration efforts.

An important TNC objective in Great South Bay is to position the estuary to be more resistant to harmful algal blooms." [hr]