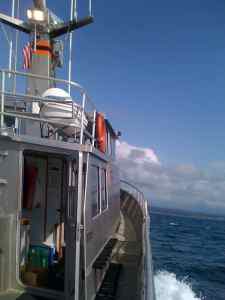 Aboard the Oregon State University R/V Elakha during a MOCHA research sampling cruise off the Oregon coast. Credit: OSU.

In July 2010, NOAA and Oregon partners forecasted rising algae cell and toxin levels nearshore, providing state officials advance warning of a coast-wide harmful algal bloom (HAB) event and prompting proactive shellfish testing. The prediction was verified when further testing revealed that levels of the HAB toxin domoic acid exceeded regulatory limits in razor clams. The extent of this HAB outbreak forced officials to close razor clam fisheries along roughly two-thirds of Oregon's coast. In late August, an advance warning of a second HAB event also proved correct and the state expanded the closure to include mussels. By September, the steady stream of monitoring data provided evidence that both threats had begun to diminish. This gave officials time to safely reopen recreational shellfish harvests in October.

The early warning was possible because a team from Oregon had successfully competed for limited HAB research funding and NOAA initiated the regional MERHAB project called, 'Monitoring Oregon's Coastal Harmful Algae' (MOCHA). MOCHA was active from 2007 to 2014. Prior to MOCHA little was known about Oregon oceanographic conditions that promoted the growth of toxin-producing HABs, how HAB toxins got into harvestable shellfish. The two state agencies responsible for managing recreational shellfishing had no early warning system and depended solely on measuring toxin levels in shellfish. If level exceeded regulator thresholds Oregon officials had few options but to issue coast-wide closures which had economic impacts within communities dependent on shellfish diggers and related tourism. A 2009 state sponsored estimate valued recreational shellfisheriesat at least $31 million to Oregon coastal communities.

HAB-related shellfish closures have been a public health concern in Oregon for many decades. Consuming HAB toxin contaminated shellfish can cause a range of human health issues ranging from mild to severe gastrointestinal distress and vomiting, short-term memory loss, and in extreme cases paralysis and death. Oregon has been testing shellfish for levels of the algal toxin saxitoxin since the1950s. In the 1990s,domoic acid emerged as a new threat and has been monitored in Oregon shellfish since 1994. Monitoring in near shore waters started in2005. Other toxins and related HAB species have more recently caused concern in Oregon. 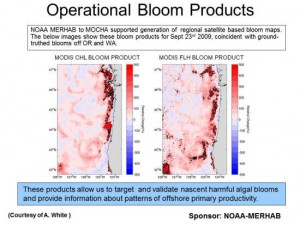 Oregon state agencies felt expanded nearshore HAB monitoring would offer shellfish harvesters greater confidence that the seafood they gather was safe and healthy and had been aware of the benefits of a previously NOAA funded regional HAB project that had successfully transitioned to state funding in Washington State. Like the neighboring ORHAB project, Oregon officials hoped the MOCHA project would enable them to both mitigate the economic impacts of HAB events while also continuing their strong record of protecting public health from HAB toxins.

In an earlier endorsement for MOCHA, Alex Manderson, a shellfish Specialist with the Oregon Department of Agriculture Food Safety Division stated, 'the regular HAB monitoring program is critical to us because it has given us more lead time to make decisions with greater confidence that ultimately protect public health while minimizing the economic impacts of HAB closures on our valuable recreational shellfisheries.'

In addition to the vital nearshore monitoring of these algal species and HAB toxins, MOCHA scientists also monitored Oregon's coastal ocean. Offshore data collected by MOCHA completed a missing piece of the puzzle in our understanding of ocean conditions along the Pacific coast which are conducive to the formation of toxic algae blooms. MOCHA integrated offshore and near shore HAB monitoring data into a comprehensive database that includes environmental conditions, HAB species abundance, and toxin levels.

The MOCHA team used this database to identify potential HAB 'hotspots' or locations that may spawn a toxic bloom. MOCHA data is already being used to test and develop models which may one day enable more than the week or two early warning the team demonstrated in 2010. Such forecasts are a key goal of NOAA HAB investments in every coastal region.

Despite the MOCHA team's successful demonstration that enhanced monitoring can give an early warning of HAB events, the challenging budget climate in Oregon state agencies prevented the program from transitioning to sustainable funding before NOAA funding ended. Unlike in Washington State the future of HAB early warning in Oregon remains uncertain. 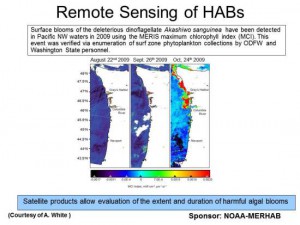 MOCHA-derived satellite products allow for the identification of HAB hotspots along the Oregon coastline. Credit. OSU.

However NOAA funding of MOCHA had a number of major advances including:

This project was funded through NOAA's national Monitoring and Event Response for Harmful Algal Bloom (MERHAB) program. Given limited funding for HAB research, NCCOS is committed to maintaining, a regional, competitive approach for MERHAB and other National HAB Research programs.