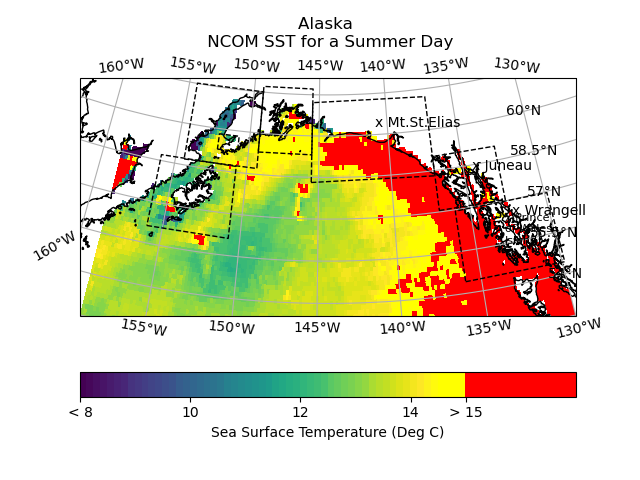 Vibrio parahaemolyticus are naturally occurring bacteria in coastal waters. Eating raw or undercooked seafood with high levels of Vibrio can cause infection. While these cases can be uncomfortable (e.g., upset stomach, gastroenteritis), they seldom cause serious illness. However, Vibrio infections and concerns surrounding them can have negative impacts on restaurants and the shellfish industry.

Temperature is a major driver of Vp growth. In general, once water temperatures exceed 59 F, growth will occur, with faster replication at higher temperatures (Goertz et al. 2013). Because of the strong dependence on temperature for growth, SST is used in some cases to trigger harvest restrictions. The new Alaska SST Tools can help in planning safer harvest and cooling strategies by indicating when and where temperatures have already or are likely to exceed this threshold.

The Alaska Max SST tool tool shows the maximum SST over the last seven days derived from VIIRS (Visible Infrared Imaging Radiometer Suite) at a nadir resolution of about 750 m (NOAA CoastWatch). The temperature scale is demarcated at the critical temperature of 59 F with red or with the darkest shade in the color blind scale option.

The Alaska Navy NCOM model tool shows SST forecasts at a resolution of 3.6 km or 1/30th of a degree. Forecast images are shown in a loop at an interval of every three hours over the next four days.

Sign up to receive forecast updates and breaking news on Vibrio.