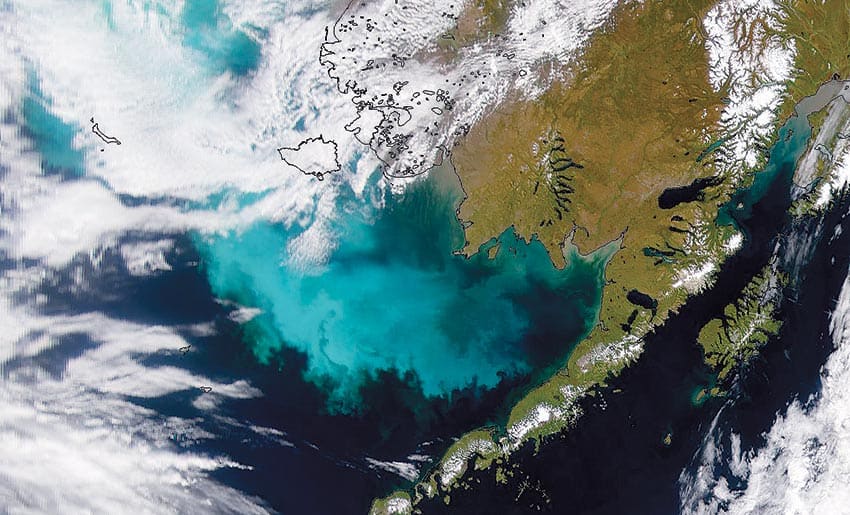 Changes in the northern Alaskan Arctic ocean environment have reached a point at which a previously rare phenomenon — widespread blooms of toxic algae — could become more common, potentially threatening a wide range of marine wildlife and the people who rely on local marine resources for food. A new study concludes that the rapid warming of ocean waters seen across the Arctic is setting the stage for dangerous harmful algal bloom (HAB) events in the waters of western and northern Alaska, formerly thought to be too cold for significant germination and growth.

The study focuses on the algae Alexandrium catenella which produces saxitoxins that can cause paralytic shellfish poisoning if they accumulate in shellfish consumed by humans. The toxin can also cause illness and mortality of marine wildlife such as fish, marine mammals, and seabirds.

Scientists counted and mapped Alexandrium cysts lying on the seafloor from the Northern Bering Sea to the Chukchi and Beaufort Seas of Alaska that were collected in 2018 and 2019. In their cyst stage, Alexandrium cells settle on the seafloor where they can remain inactive for decades, waiting for water temperatures to become favorable for them to hatch and become free-swimming adults that can form HABs.

The authors demonstrate that warming over the last two decades has increased bottom water temperatures in Ledyard Bay and nearby waters by nearly 2°C, sufficient to nearly double the flux of germinated Alexandrium cells from the seafloor and also speeding up the process, thereby advancing bloom initiation by almost three weeks and lengthening the window for favorable growth and bloom formation in surface waters.

In addition, atmospheric conditions and less seasonal sea ice means organisms that rely on sunlight to grow, including Alexandrium, are able to thrive and multiply. As a result of this and related changes, the authors write in their paper, the Arctic Ocean ecosystem is witnessing an “unprecedented regime shift” that will increasingly threaten the people and wildlife of the Arctic ecosystem during warmer years.

The study was led by scientists at the Woods Hole Oceanographic Institution (WHOI) in collaboration with colleagues from the National Oceanic and Atmospheric Administration’s (NOAA) Northwest Fisheries Science Center (NWFSC) and other researchers in the U.S, Japan, and China. Support for research was also provided by the U.S. National Science Foundation Office of Polar Programs and NOAA’s Arctic Research Program, National Institute of Environmental Health Sciences, Alaska Fisheries Science Center and NCCOS Ecology and Oceanography of HABs Program.

Protecting Your Dog from Harmful Algal Blooms: Information and Resources