Reducing the size of the widespread area of hypoxia (low oxygen) in the northern Gulf of Mexico - known as the "Dead Zone" - represents one of the nation's crucial water management challenges. Recent NCCOS-sponsored research has led to the development of a new tool to assess hypoxia formation and its response to key physical and biological drivers.

Dr. Dubravko Justic from Louisiana State University has coupled two models, incorporating surface winds, tides, currents, heat, oxygen, solar radiation, and freshwater and nutrient fluxes from the Mississippi and Atchafalaya Rivers. The resulting tool indicates that hypoxia originates in bottom waters on the mid-continental shelf and goes through a seasonal cycle, with intermittent episodes during May and June, persistence during July and August, and dissipation during September. These results point to short-term variability in the extent of hypoxic bottom waters, such as from cold fronts and tropical storms, indicating that the size of the mid-summer hypoxic zone may not be adequately captured by a single, shelf-wide sampling cruise (the current approach). 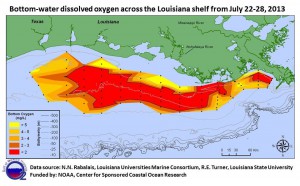 The study is published in the journal Continental Shelf Research .