Using little more than a window screen to collect algae, NCCOS scientists have developed a simple, low-cost protocol for monitoring harmful, bottom-dwelling algae in diverse marine habitats around the world.

The window screens mimic natural surfaces that harbor toxic algae and allow direct comparisons of algae abundance from different locations. In a series of field experiments in tropical environments, researchers showed that toxin-producing microalgal cells were sufficiently mobile to colonize window screens suspended near the seafloor within 24 hours. The abundance of cells recruited on window screens was highly correlated with the abundance of cells found in the surrounding environment. Until now, sampling and monitoring these cells has been difficult and expensive, given the broad distribution ofmicroalgae over a variety of surfaces, such as coral, seagrass, and rocks. 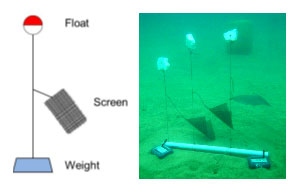 The toxins produced by some bottom-dwelling microalgae can accumulate in fish and shellfish - making people sick, disrupting human food supplies, and limiting the development of profitable fisheries.Some of the most threatening of these algae belong to the genus Gambierdiscus, whose toxins can cause ciguatera fish poisoning. Globally, ciguatera fish poisoning is the most common cause of non-bacterial, seafood poisoning associated with eating fish.

In 2012, NCCOS helped organize and teach an international workshop in Malaysia that included a week-long field exercise on how to use the window screen technique. An upcoming article in the journal Harmful Algae will provide natural resource managers around the world with more information on this technique.