NCCOS-sponsored scientists have discovered a simple indicator to predict one type of harmful algal species bloom or outbreak. The first potentially reliable biological indicator for forecasting a harmful algal bloom of the toxic dinoflagellate species Dinophysis ovum in the Gulf of Mexico is the presence of a primary food source, a small ciliate protozoan. 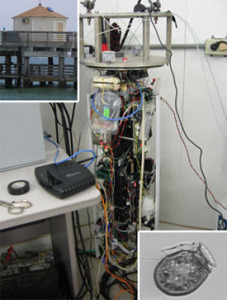 The NCCOS sponsored research project "Mechanism of Harmful Algal Bloom Initiation in the Western Gulf of Mexico," using long-term time-series from an Imaging FlowCytobot (IFCB), analyzed cell abundance and bloom timing of Dinophysis and its common prey, the small ciliate Mesodinium. The scientists, led by Texas A&M University, examined the relationship between Dinophysis and its ciliate prey. The scientists discovered that Mesodinium abundance, species composition, and environmental conditions can affect initiation, presence or abundance of Dinophysis ovum and thus may help in the prediction of future blooms. The research is published in the Journal of Plankton Research.

The dinoflagellate alga Dinophysis flourishes worldwide in coastal and oceanic waters and can cause diarrhetic shellfish poisoning (DSP) in humans. The first closure of U.S. shellfish beds occurred in 2008 because of Dinophysis. Dinophysis, like some other dinoflagellates, engulfs ("swallows") small ciliates for energy and also photosynthesizes. This behavior forms the basis for a new method to predict Dinophysis outbreaks.