The PSP RBA had been previously transitioned to operations in seven Southeast Asian and five African nations by this NCCOS team in cooperation with the International Atomic Energy Agency (IAEA) and is now accepted as an Official Method of Analysis of AOAC International. In contrast, this was the first time CFP detection methods were transferred for use by regional reference laboratories. CFP has the highest public health impact of all harmful algae poisonings, exceeding cost estimates for all other poisonings combined by more than twenty-fold. 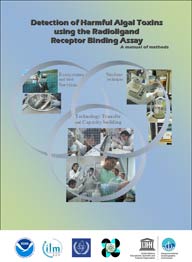 This technology transfer activity is central to a larger IAEA technical cooperation program. The current four-year project to transfer NCCOS toxin detection methodology was initiated with representatives of environmental, academic and fishery institutions from 12 Caribbean and Latin American members of the Intergovernmental Oceanographic Commission (IOC) of UNESCO. HABs present a severe threat to seafood consumers and coastal economies in the U.S. and Central American countries sharing the Caribbean Sea and Pacific Central-American Large Marine Ecosystems. These NOAA-IAEA projects in Southeast Asia, Africa and Latin America strengthen regional partnerships for HAB monitoring, seafood safety and promote global trade to the benefit of these regions and the United States.