Studying the Impacts of Sea Level Rise on Hawaii Habitats

An NCCOS-funded Ecological Effects of Sea level Rise (EESLR) project led by The Nature Conservancy (TNC) on the Big Island of Hawaii is working to understand and predict the effect of sea-level rise on unique and historic Hawaiian groundwater-fed pools, wetlands, and fishponds. On September 7, scientistsjoined local stakeholders at a Change Tool Development Workshop and community meeting in Waimea, HI, to demonstrate and obtain feedback on a participatory application device or 'app' that visually displays the impacts of sea level rise on anchialine pools and fishponds. 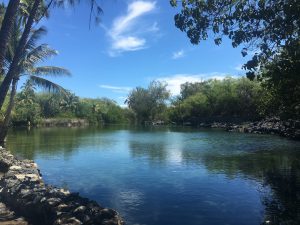 The historic Kiholo Fish Pond. The fishpond and the suite of coastal habitats surrounding it are one of the sites proposed for further study by EESLR in Hawaii. Credit:NOAA.

Groundwater-fed 'anchialine' pools, wetlands, and fishponds (inland water bodies with an underground connection to the ocean) occur throughout the west Hawaii coastal corridorand support numerous endemic species whileproviding key ecosystem services to natural and human communities. The fishponds have cultural significance to native Hawaiians and are integral to the watershed and land stewardship system in Hawaii. The importance of these habitats was a key reason for their inclusion as NOAA's West Hawaii Habitat Focus Area. Predicting the effect of sea level rise on these ecosystems requires models that incorporate groundwater levels; methods for incorporating groundwater levels have been developed for the West Hawai'i Sentinel Site, but data on groundwater levels do not yet exist.

EESLR data will support mapping and app development. Tool scenarios include ponds being both inundated and created, below ground fauna dispersal into newly created inland habitats, and surface dispersal of non-native invasive fishes under different time periodsand rates of SLR. These models and online maps will be used by managers to predict the response of Hawaii coastal ecosystems such as anchialine fishponds to rising seas.

Other partners include the National Park service and severallocal communities, groups, and agencies.

NSF Study: Climate and Agricultural Practices May Contribute to Increase of HABS in Lake Erie