A new harmful algal bloom field test was used on a live bloom for the first time allowing for near-real-time, ship-board characterization of a bloom patch during a research cruise onboard the R/V Bellows. Scientists with the National Centers of Coastal Ocean Science (NCCOS)joinedresearchers from Florida's Fish and Wildlife Conservation Commission's (FWC) Fish and Wildlife Research Institute (FWRI) and Mote Marine Laboratory on a cruise in late August to monitor a patchy harmful algal bloom (HAB) of the Florida red tide organismKarenia brevis,known for causing human respiratory irritation and numerous fish kills. 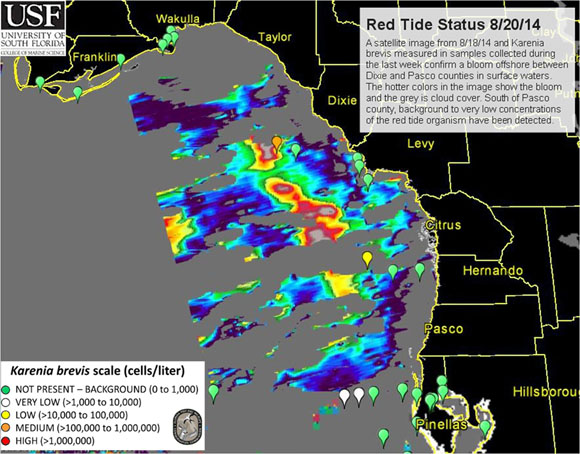 NCCOS participation in this cruise focused on initial field testing of physiological biomarkers for HABmonitoring. These markers of cell growth, cellular stress, and cell death wereadapted to flow cytometry by scientists at the Center for Environmental Health and Biomolecular Research (CCEHBR) in Charleston, SC. The transfer of this technology to coastal managers began recently with the training of a visiting scientist from FWRI at the CCEHBR laboratories. This research cruise wasthe first opportunity for NCCOS scientists to begin the critical process of testing these biomarkers in field bloom populations.

Following field validation, the transfer of these NCCOS-developed tools to FWC/FWRI scientists will greatly expand the current capabilities of coastal managers to precisely forecast the longevity and potential impacts of a Florida red tide.