The Marine Toxin Laboratory at the University of El Salvador (LABTOX-UES), supported by the International Atomic Energy Agency (IAEA) is undergoing the national accreditation process for the analysis of saxitoxin, a marine toxin generated by some harmful algae blooms that builds up in shellfish. Consumption of contaminated shellfish can cause paralytic shellfish poisoning (PSP). The current project aims to validate laboratory infrastructure, processes and methods to support local analyses of shellfish and protected species. 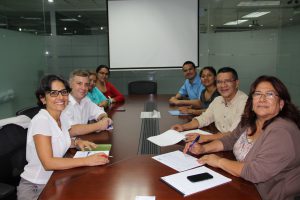 The IAEA turned to NCCOS for help with laboratory set-up and to provide guidance on the application of anAssociation of Analytical Communities (AOAC) validated detection technique for algal toxins called a receptor binding assay in LABTOX-UES. Although this method is widely accepted, individual laboratories may need to prove their skill in the technique to national authorities so that their results are recognized.

In 2013, during the mortality of hundreds of sea turtles along beaches in El Salvador, the LABTOX-UES identified the presence of saxitoxin in turtle tissues using the receptor binding assay. Additional monitoring efforts at LABTOX-UES are ongoing to expand the detection of HAB species and for the testing of locally consumed shellfish for algal toxins. Local accreditation of the NCCOS developed techniques used by LABTOX-UES will allow for increased surveillance of marine toxins to inform resource managers about the threat of HAB associated toxins to protected species and to increase the protection of public health while possibly expanding the economy through the exportation of shellfish.

This project is supported by the IAEA as part of a NOAA/IAEA Practical Agreement.