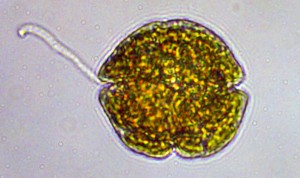 Light micrograph of K. mikimotoi taken from a bloom sample.

Starting in late Sept. 2013, a bloom of the phytoplankton Karenia mikimotoi began, progressed, and ultimately covered most of Kachemak Bay, Alaska. The bloom caused the water to turn brown and foam at the surface for several weeks, causing concern in local communities. In response, the Kachemak Bay National Estuarine Research Reserve and the NCCOS Kasitsna Bay Laboratory, with assistance from community plankton monitoring volunteers, collected filtered water samples to identify the species.

Using DNA analysis, Reserve staff confirmed that the bloom was indeed caused by K. mikimotoi. This is the first documented occurrence of this species in Alaska. 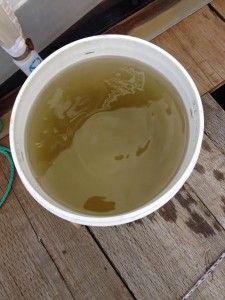 The bloom of K. mikimotoi was so dense that it turned the water very dark brown.

As soon as the bloom organism was identified as a harmful species, NCCOS scientists in Beaufort, N.C. and Homer, Alaska prepared a fact sheet and distributed it to local resource managers and news outlets to inform the public about what was causing the bloom and provide facts about similar blooms in other parts of the world.

Though not toxic to humans, Karenia mikimotoi frequently kills large numbers of fish and invertebrate species. In Kachemak Bay, at the height of the bloom (Sept. 29 -Nov. 3, 2013) a minor fish kill of sculpins, minnows, and starry flounder occurred at Halibut Cove. Extensive eagle activity was observed at the same time, which may indicate that eagles were scavenging on dead fish.

Previous K. mikimotoi blooms have been reported from the coastal regions of Australia, China, Ireland, England, France, Hong Kong, western India, Japan, New Zealand, and from Mexico to Florida in the Gulf of Mexico. Colder water blooms, like the one in Kachemak Bay, have been noted in the North Sea off Denmark, Ireland, Norway, and Scotland.

Other News Covering the Bloom: